Palestinian MKs: Israel Should be Sued at ICC 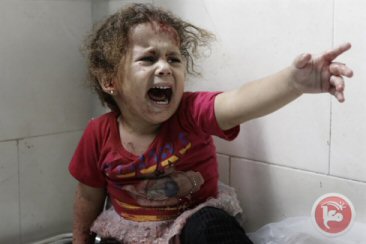 Palestinian members of the Israeli Knesset said Tuesday that the UN report on last summer’s war in the Gaza Strip provided enough evidence that Israel should be taken before the International Criminal Court.The Joint List, which groups the main Palestinian parties in the Knesset, said in a statement that it welcomed any serious and independent investigation into the conflict and that Israel ‘should necessarily be sued over the war crimes’ it committed.

While largely positive about the UN report, the Joint List criticized the commission for ‘equating the violations committed by Israel and those committed by Palestinian groups.’

According to Ma’an News Agency, the Palestinian MKs said that the facts presented in the report showed a huge discrepancy between the two sides, with Gaza suffering disproportionately greater casualties and destruction than Israel.

The UN report released Monday said there were ‘credible allegations’ that both sides had committed war crimes during the conflict, which killed more than 2,140 Palestinians, most of them civilians, and 73 people on the Israeli side, mostly soldiers.

The Palestinian leadership in the occupied territories has been seeking to open criminal proceedings against Israel at the ICC as part of an increased focus on diplomatic maneuvering and appeals to international bodies.
Much of their focus has been on last summer’s devastating war.

The Joint List on Sunday urged Israel to sign the Rome Statute that established the ICC, criticizing Israel for being ‘one of few states who refused to sign it.’

Israel signed the Rome Statute in 2000, but two years later ‘unsigned’ it along with the US, claiming that it had ‘no legal obligations” to the ICC.

The Joint List was formed earlier this year by four Palestinian parties — United Arab List, Ta’al, Balad and Hadash. It was the first time parties representing Palestinian citizens in Israel had joined forces.

They won 13 seats in the Knesset in the March elections, becoming the third largest grouping in Israel’s parliament.

As part of the opposition, they have vowed to fight for the rights of Israel’s Palestinian minority which accounts for more than a fifth of the population, and to push for a resumption of peace talks with Palestinian leadership in the occupied West Bank and Gaza.

Tuesday’s statement came a day after another Palestinian MK with the Joint List announced his plans to join a flotilla seeking to break the Israeli blockade on Gaza.

Basel Ghattas said in an open letter that the flotilla aimed to end Israel’s blockade by focusing international attention on the 1.8 million Palestinians in Gaza living in ‘disgraceful, prison-like conditions’ as part of a total siege which constitutes ‘collective punishment and is a brutal violation of international humanitarian law.’
His announcement has caused outrage among Israeli politicians, who have accused him of working against Israel.