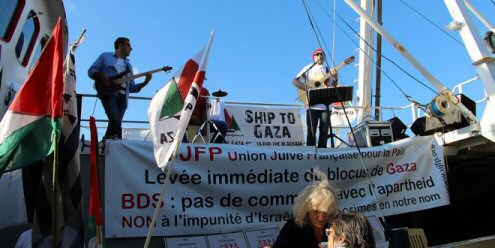 The Knesset is currently holding a ‘heated debate’ on whether or not to rescind the diplomatic immunity of MK Basel Ghattas of the Joint List party, after he announced on Monday his intention to join the international Freedom Flotilla in its attempt to break the Israeli siege of Gaza.Ghattas has managed to spark huge controversy by making public his intention to join other public figures and international activists on the Freedom Flotilla, a collection of boats travelling to Gaza in an attempt to break the Israeli blockade of Gaza.

PNN reports that the flotilla reached the Mediterranean two weeks ago, and yesterday prepared to set sail from Greece to Gaza. The boats are carrying much-needed aid for the besieged Gaza Strip.

Israel has however warned that it will intercept the flotilla and stop its arrival in Gaza.

According to Middle East Monitor, Israel has stated that it would not allow “unauthorized boats” to enter the territorial waters of the Gaza Strip. Israeli Foreign Ministry spokesman Emmanuel Nachshon described the action as “unnecessary provocation”, adding that “if the so-called helpful Gaza flotillas were really interested in the welfare of the population in Gaza, they would send their aid via Israel.”

Between 2008 and 2010, the International Freedom Flotilla has attempted several times to break the Israeli siege of Gaza. This attempt will commemorate 5 years since Israel’s deadly attack on the Mavi Marmara, which resulted in the deaths of 9 activists from the Free Gaza Movement and the Turkish Foundation for Human Rights and Freedoms and Humanitarian Relief (İHH).

Hanin Zoabi, a female Palestinian MP in the Knesset who was on board at the time, was widely condemned by the Israeli government as a “traitor” — Ghattas is now facing similar indignation.

In a letter to Israeli Prime Minister Benyamin Netanyahu, Zoabi expressed her desire to join this Freedom Flotilla attempt, but admitted that she had ultimately decided not to participate again this year.

She said: “Any normal person would participate in the fight against the siege and imprisonment of two million people on a piece of land.”