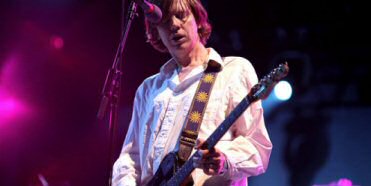 Thurston Moore, founding member of the 90’s rock band Sonic Youth, has confirmed his support for the cultural boycott of Israel, following the cancellation of his performance in Tel Aviv earlier this year, reports Middle East Monitor.The renowned singer-songwriter and guitarist made the remarks in an article written by British-Palestinian musician Samir Eskanda, and published this week by online music magazine The Quietus.

The piece, ‘I’m One Of 1000 UK Artists Boycotting Israel. Here’s Why’, makes the case for Boycott, Divestment, and Sanctions (BDS), and includes contributions from artists who have decided to support the Palestinian call.Thurston Moore cancelled his band’s scheduled performance in Tel Aviv in April “without giving an official explanation.”

However, speaking with Eskanada, he confirmed that he had “arrived at the personal conclusion that to perform with my band in Israel was in direct conflict to my values.

”With the realization that a cultural and academic boycott is central to its purpose in exposing a reality of brutal human rights violations – including those accompanying Israel’s discriminatory laws and occupation of the West Bank – I felt the need, with humility, to cancel the engagement.”

Moore has thus committed himself to respecting the boycott “until the time comes for it to be unnecessary.”

The article also quotes founding member of Jesus and Mary Chain and film director Douglas Hart, who similarly explains why he has “refused professional engagements in Israel”.

“Who in their right mind would have performed in South Africa during the Apartheid era? However you wish to term what is happening to Palestinians at the hands of the Israeli state, or whether you agree or disagree with the parallels between apartheid South Africa and Israel’s occupation of Palestine, you can’t deny the abject suffering of the Palestinian people, and the obscene iniquity between the quality of lives of Palestinians and Israelis. We have to do anything we can to change it.”