Mads Gilbert: ‘My camera is my Kalashnikov’ 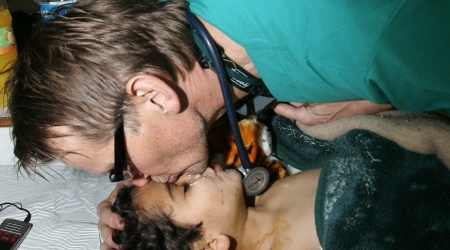 Amid a dense jumble of chaotic streets and overcrowded apartment buildings not far from the seafront, the Shifa hospital is in many ways the beating heart of Gaza. Like any hospital, it is a place of life and death, relief and agony, hope and despair.But the Shifa is more remarkable than most. Over the past 10 years, it has dealt with four intense conflicts, and since 2007 has endured a blockade that has led to shortages of drugs and equipment, regular power crises and the near-impossibility of medical staff leaving Gaza to train, widen their experience or attend conferences. The Shifa is a hospital under siege.

During last summer’s war in Gaza, as on previous occasions, the dead and injured were brought to the Shifa day and night during seven weeks of bombardment by Israeli forces. Palestinian medics often worked for 30 hours at a stretch, snatching short breaks then returning to duty. Among them was Dr Mads Gilbert, a Norwegian anaesthetist and trauma expert – and a veteran of wars in Gaza.

Gilbert – who describes himself as a “political doctor” and a practitioner of “solidarity medicine” – has written a book, Night in Gaza, which describes his time at the Shifa last summer. “It’s a place of human greatness, suffering and endurance – and an almost incomprehensible mastering of a situation that seems overwhelming, impossible to deal with. Yet they [the medical staff] stand tall, don’t reject a single patient, do phenomenal, very complicated surgery with a high level of professionalism,” he said.

When mass casualties were brought in, the first job of the medics was to take difficult decisions. “Triage is extremely efficient, but it’s brutal,” he said. “You have to let the dying die.” It was a marked contrast to hospitals in Norway, where medical resources would be thrown at patients with limited expectation of survival. Despite the harsh conditions at the Shifa, and the constant fear among the medics that they could find themselves treating their own relatives, they performed “world-class war surgery under world-class leadership”.

Gilbert is something of a hero to Palestinian sympathisers. Close to 1,000 tickets to a talk he gave last week in London sold out in four hours. But, inevitably, in the binary world of the Israeli-Palestinian conflict, he is feted by one side and abhorred by the other.

Like many of his generation – he is 68 – he was a late convert to the Palestinian cause. “I was brought up with the Zionist narrative. My mother was quite radical; she was a nurse, and she told me so much about Israel, how they made the desert bloom, about the kibbutz system, which was a semi-socialist experiment.”
During the 1967 six-day war between Israel and its Arab neighbours, Gilbert responded to an appeal for young foreigners to go to work on kibbutzim to replace Israelis fighting in the conflict. The day he was accepted, he had a shocking conversation that changed his view. “It was the first time I had even heard about the Palestinians.” He cancelled his trip to Israel.

Fifteen years later, he volunteered as a medic in Lebanon, which Israel had invaded. “I had my first war victims, and the totally shocking experience of the mercilessness of the Israeli war machine.” Although he has since worked as a medical volunteer in many places, including Cambodia, Burma, Afghanistan and Angola, “Palestine has always been at the core.”

A self-confessed “socialist, Marxist – and human being”, Gilbert draws a clear distinction between anti-Zionism and antisemitism. “I’m a strong anti-racist, there is not a milligram of antisemitism in me. But I oppose apartheid and colonialism.” This is “not a difficult conflict, it is an illegal occupation – it continues, it expands and it costs thousands of innocent Palestinian lives. These people have the right to defend themselves, the right to resist. The right to resist implies also the right to resist with arms, if you’re occupied.”

In Night in Gaza, Gilbert repeatedly refers to the might and brutality of the Israeli military, but does not mention rockets fired by Hamas and other militant groups. Asked about this, Gilbert quotes from the book’s preface, in which he states he does not support Hamas or Fatah (the two main Palestinian factions), but the Palestinian people: “I want to be crystal-clear about this – I condemn any Palestinian attack on any civilian target, period. If one Israeli child is killed, it is one too many. But nor should more than 550 Palestinian children be killed.”
He also rejects claims by the Israeli government that the Shifa was used as a base by Hamas officials and militants in the knowledge that Israel would not attack the hospital. Gilbert points out that a number of hospitals and medical facilities were in fact shelled by Israel during last summer’s war, and that Hamas won free and fair elections in 2006: “I have never seen any activities in the Shifa that would violate the Geneva conventions. But I didn’t explore every corner of the large hospital compound. If I saw anything inside the Shifa that in my opinion violated the Geneva conventions and, should I say, the ‘holiness’ of a hospital, I would have left.”
The book contains dozens of harrowing photographs, many of badly injured children, taken by Gilbert during his stay in Gaza last summer, although the most graphic were excluded. He describes his camera as “my Kalashnikov”, saying that this kind of medical documentation of war is a powerful weapon – and one that is feared by Israel.

This, he believes, contributed to Israel’s “Kafkaesque” decision to ban him indefinitely from Gaza last October for unspecified security reasons. “They don’t even explain why. It is non-appealable, totally irrespective of international opinion and totally against international law. It is a tiny taste of what it means to be under brutal Israeli rule.” Nevertheless, after 15 years of visiting Gaza, he intends to go back.

His experiences in Gaza “have totally changed me as a human being”, he says. “The more I see and know, the more I become skinless, sensitive. The human condition affects me more and more.” He has been forced to develop coping mechanisms – what he calls “perceptual focus to shield out the worst stuff” – for dealing with so much physical and emotional trauma. “You have to be very well prepared; this is not a place for disaster tourism. We didn’t sleep much, we didn’t eat or drink [the war began during Ramadan, the month of fasting for Muslims] – it was extreme endurance.”

But, he adds, he witnessed an extraordinary “consolidated unity. Medics, cleaners, ambulance crews, patients, families – they were all part of the resistance.” For Gilbert, showing solidarity is his duty as a doctor. “I’m not neutral. My obligation as a doctor is to take the side of my patient – be it a single patient, a family, a village, a community, a nation. In Gaza, if we only give them bandages, we become part of the problem. If you want to be neutral, you end up being part of the problem. We are all complicit, whether we shut up or stand up.”
‘The unbearable sound of children shrieking’

The mood is tense. Everybody is ready to run and meet the next load of casualties.

The entrance to the emergency department soon fills with stretchers and running ambulance crews. The area begins to swarm with civilians, with and without visible injuries, policemen in blue camouflage uniforms pushing journalists and cameramen out of the way, while medical workers flock around the newly arrived patients. The air is a cacophony of shouts, screams and sharp commands from the senior surgeon in charge of sorting the casualties. Loudest and most piercing is the unbearable sound of children shrieking.

Two young boys, one aged two or three and the other maybe seven, are lying on a stretcher. They have visible burn injuries and a large number of small, black wounds on their faces and necks, some of them bloody, like traces of shrapnel. Dr Atta al-Mzainy looks at me sharply.

“We’ve got to take them to the intensive burn care unit. Straight away,” he shouts. “We can take one each. You take the younger one.”

“OK,” I answer, my heart pounding. Everything is collapsing around us now, I think to myself. The bombing throughout the night, the number of casualties; it all feels like a tidal wave of blood and screams.

As I run, I look down at the little boy. His hair is singed on large areas of his head. The skin is loose on his forehead and across the root of his nose. His eyelids are thick and swollen, but his eyes are open, staring out at the world with a wild expression. He has a deep cut above his left eye, and blood is coming from his ear on the same side. Does he have shrapnel inside his skull, or is it a flesh wound? His consciousness is not impaired; quite the opposite. I notice that his arms and legs are constantly moving as I run behind my colleague, terrified of tripping and dropping the boy on the tarmac.

The Israeli drones buzz above us. Can nobody stop this nightmare?