Judge Davis: Israel Must Stop the Use of Military Force 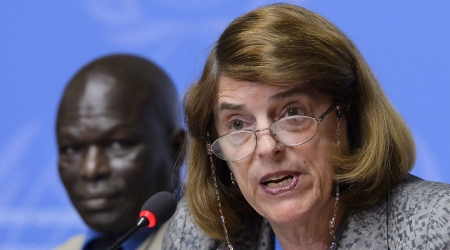 American judge Mary McGowan Davis, stated that the most important part of the UN Human Rights Council’s recent report about crimes committed by the Israeli occupation in the last offensive against Gaza, is that Israel must not use military force.According to Al Ray Palestinian Media Agency, the head of the UNHRC’s investigative committee said to Haaretz that the last Israeli offensive in Gaza caused unprecedented destruction in Gaza and cost the life of over 2,000 Palestinian civilians.

She shed light on the seriousness of throwing heavy bombs on residential neighborhoods.

The UNHCR nominated U.S. judge Mary McGowan Davis as head of the Council’s investigative committee to look into the war crimes committed during the 50-day Israel aggression against Gaza last summer.

The investigation panel found evidence of possible war crimes on part of both the Israeli occupation and Palestinian factions during this last aggression against Gaza.