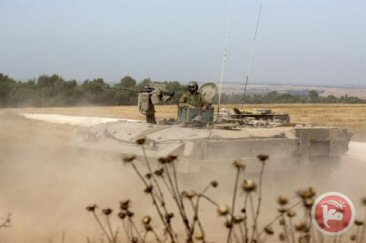 The Israeli air force attacked a target in the northern Gaza Strip in the early hours of Wednesday after another missile fired from the Gaza Strip hit an open area near the town of Ashkelon, in the western Negev. Ramadan celebrants from the Gaza Strip will be barred from travelling to Jerusalem for prayer in the Al-Aqsa Mosque, this week, following the rocket fire.The Israeli strike landed in Beit Hanoun in the northern Gaza Strip, witnesses told Ma’an, with the Israeli army stating that the strike had targeted ‘the launcher from which the rocket was fired at Israel earlier.’

The strike came hours after the rocket fired from the Gaza Strip fell on open ground in the vicinity of Yad Mordechai, a kibbutz near the Israel-Gaza border.

No injuries were reported in either the rocket launch or the Israeli strike.

Wednesday’s exchange was the fifth in just under a month, with the most recent rocket fired from Gaza landing in Israel on June 6 answered within hours by an Israeli air strike into the coastal strip.

A rocket was fired on June 11 but it fell short and landed on the Palestinian side of the Gaza border.

No damage or casualties have been caused by the recent rockets fired from Gaza, and Israeli airstrikes have left structural damage only.

The exchanges come as Israel and Hamas have allegedly been holding indirect talks for cementing a long-term truce in the Gaza Strip, Hamas sources said last week.

While an Egyptian-brokered ceasefire came into effect on August 26, ending a nearly 50-day war between the two sides, pledges to resume follow-up talks regarding longer term relations were delayed several times and never formally resumed.

The conflict left over 2,200 Palestinians dead, the majority civilians, and 73 on the Israeli side, most of them soldiers.

It also caused heavy damage to Gaza’s infrastructure and damaged more than 160,000 homes.

Much of the recent sporadic rocket fire towards Israel from Gaza has been claimed by a small group by the name of Sheikh Omar Hadid-Bayt al-Maqdis, allegedly aiming to challenge Hamas’ rule in the strip.

Hamas had denied involvement in the attacks and has attempted to vamp down on armed activity by smaller political groups reportedly growing more active.

‘…Hamas is finding it difficult to control Islamic Jihad and other elements in order to do this,’ an Israeli source told AFP last week, referring to Hamas’ ability to maintain quiet in the coastal enclave.

As occasional rocket fire continued this month, Israeli forces have maintained regular incursions into the Gaza Strip as Palestinians along both the land and seaside borders are facing near daily fire from forces, with three Palestinian fishermen shot dead since September and dozens more injured in the same time period.

Ma’an additionally reports that worshipers from the Gaza Strip will be barred from travelling to Jerusalem for prayer in the Al-Aqsa mosque this week after rocket fire from Gaza, the coordinator of Israeli government activities in the Palestinian territory said Wednesday.

The announcement came after rocket fired from the Gaza Strip hit an open area near the town of Ashkelon in the western Negev during the early hours of Wednesday, causing no damage or casualties.

The 500 men and women scheduled to leave the strip Thursday and Friday will not be allowed to travel because “the security conditions around the crossing aren’t stable,’ Yoav Mordechai said, adding that the recent rocket fire landed “not far from the Erez crossing’ on the Gaza-Israel border.

Mordechai said that Israeli authorities would reevaluate the security conditions next week in order to determine future travel by Gazans into Jerusalem, emphasizing the role that Gaza’s current governing power Hamas plays in the decision.

“Hamas is responsible for depriving worshipers of prayer in Al-Aqsa mosque during Ramadan,” Mordechai said.

“I am not saying that Hamas fired the missile, but Hamas is responsible because it controls the Gaza Strip.”
A round of sporadic rocket fire from the Gaza Strip towards Israel this month has been claimed by smaller political groups allegedly aiming to undermine Hamas’ control of the strip. Hamas has attempted to vamp down on such groups who are reportedly growing more active.

The rocket fire comes despite the August 26 ceasefire agreement reached between Israel and Hamas last summer that ended a devastating war inside of the Gaza Strip.

Meanwhile, near daily Israeli incursions continue into the coastal enclave that have left three Palestinians dead and dozens injured since September.

Wednesday’s travel restrictions come as a major blow to Palestinians planning to travel to the mosque compound in East Jerusalem during the holy month of Ramadan.

While Palestinians in the West Bank and Gaza are subject to strict limitations on movement into East Jerusalem, part of the occupied Palestinian territories, Israel has historically made gestures ahead of and during Ramadan, partially easing restrictions.

In response to this year’s good-will gesture, the director of the Palestinian Ministry of Endowment Sheikh Azzam al-Khatib told Ma’an that every Palestinian Muslim has the right to pray at the holy site during Ramadan, criticizing heavy Israeli restrictions on access.

“All the people of Palestine have the right to access the city and pray in the Al-Aqsa Mosque in full freedom without the need for permits,’ he said.

Several Palestinians have been detained or barred from the compound by Israeli forces this week, and heavy security has been seen around Jerusalem’s old city since the start of Ramadan.

Israeli easing of restrictions came on the condition that security wasn’t ‘breached.’

After an Israeli hiker was killed in the occupied West Bank and an Israeli policeman was stabbed in East Jerusalem last week, Israel on Sunday revoked entry permits for residents of the West Bank village home to the Palestinian who had stabbed the policeman.