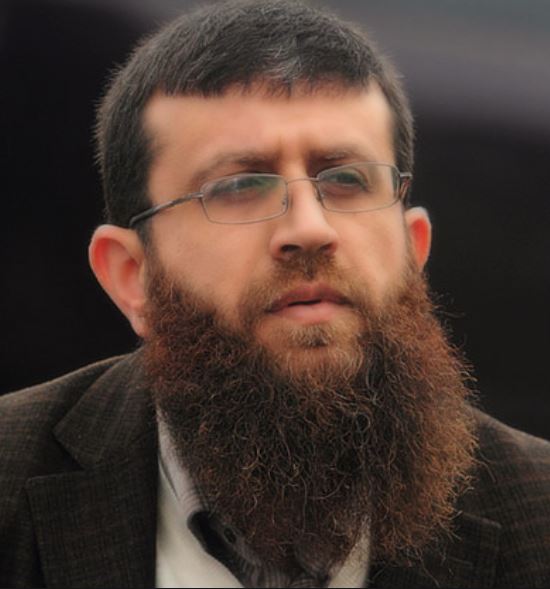 Administrative detainee Khader Adnan has been on a hunger strike for 51 days. He told Adv. Samer Simaan, a lawyer for Addameer and Physicians for Human Rights-Israel (PHR-Israel), who visited him in Assaf Harofeh hospital on June 23, 2015, that he was determined to continue his hunger strike until he was released.

He continues to refuse vitamins, minerals and medical examinations and his health keeps detriorating. He told Adv. Simaan that he constantly vomited and had serious difficulties drinking and swallowing water, which endangers him further.

According to the World Medical Association, after 42 days of such a hunger strike, it is expected that the hunger striker will suffer from loss of hearing and blindness.

Adnan is shackled to hospital bed at all times, which constitutes a violation of medical ethics, and is also constantly under surveillance by guards and life-monitoring cameras.

He is also denied visits and all contact with his family. On June 23, 2015, PHR-Israel addressed a demand to the Israel Prison Service (IPS) to remove his restraints without delay.

It was argued, among other things, that, in light of his medical condition, “his ability to constitute any kind of ‘danger’ to anyone was negligible”. A court appeal will be considered by both organizations if the shackles are not removed during the coming days.

Adnan was among thousands of Palestinians who were arrested as a form of collective punishment during the war on Gaza in 2014.

Adnan has been under constant political persecution by the Israeli authorities. He has been arrested nine times, and has spent over six years in prison, mainly in administrative detention.

For this reason, he has undertaken several hunger strikes, the most recent of which took place in December 2011 and lasted 66 days. He was on the brink of death before reaching an agreement for his release with the Israeli authorities.

The following mass hunger strike of 2012 ended after an agreement was reached between prisoner representatives and the IPS, according to which Israel would limit the use of administrative detention to ‘exceptional circumstances’ only, as is required under international law. It is quite clear that Israel has since reneged on the agreement.

Addameer and PHR-Israel call upon Israel to release Khader Adnan. Meanwhile, his family should be allowed to visit him, and his shackles should be removed.