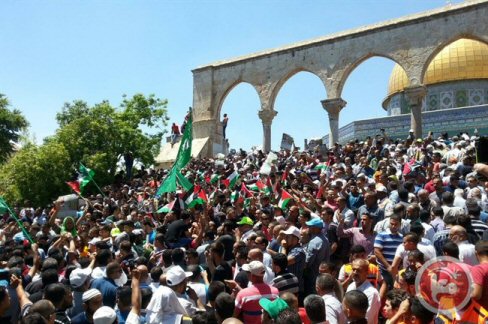 Hundreds of Palestinians marched through the Al-Aqsa mosque compound on Friday in support of Khader Adnan, as the Palestinian prisoner passed his 53rd day on hunger strike.Carrying banners depicting Adnan, the marchers crossed toward the Dome of the Rock chanting slogans and calling for his immediate release.

One banner read: ‘Freedom for the prisoner on hunger strike, Sheikh Khader Adnan.’

Tens of thousands of Palestinians were at the mosque compound to mark the second Friday of the holy month of Ramadan, with Israel relaxing normally severe access restrictions from the West Bank into East Jerusalem.

Adnan, 37, began his hunger strike nearly two months ago to protest the Israeli practice of administrative detention, under which Palestinians can be held without charge or trials for months or years.

He was detained in July last year and sentenced to administrative detention for the 10th time in his life.
It is the second time Adnan has gone on hunger strike against the practice, following a 66-day long hunger strike he undertook in 2012 — the longest carried out by a Palestinian in Israeli detention.

In recent days, however, his health has deteriorated sharply, with the International Committee of the Red Cross saying on Monday that his life was ‘at immediate risk.’

His lawyer, Jawad Bolous, told Ma’an on Friday that he was still hoping to negotiate a deal with the Israeli authorities to end Adnan’s hunger strike, but added that doctors were increasingly worried Adnan’s health might give out abruptly, causing a ‘sudden death.’

Bolous said: ‘Every minute, every second, every hour that passes makes his situation worse.’

The Islamic Jihad movement — with which Adnan is affiliated — said Friday that if Adnan dies in Israeli detention, the ceasefire agreement that ended last summer’s devastating war in Gaza would be at stake.
Movement leader Khalid al-Batsh said at a sit-in supporting Adnan: ‘We will not accept that our sons die inside jails on hunger strike while our enemies remain safe.’

Al-Batsh added that the movement would ‘not back down on its decisions: If Khader Adnan dies the ceasefire will be at stake.’

He called on both the Palestinian Authority and Egypt to take urgent action to save Adnan’s life and urged the wider international community to bring pressure on Israel.

Adnan has said he will continue his strike until Israel agrees either to release him or bring charges against him.
In addition to protesting administrative detention in general, Adnan also wrote in an open letter last month that he hoped his strike would prevent Israel from tarnishing the achievement of prisoners who secured their freedom by going on hunger strikes in the past, only to be rearrested by military forces.

In 2012, he agreed to end his hunger strike along with 2,000 Palestinian prisoners who had joined his strike after Israel agreed to lessen the practice and improve prison conditions.

Despite Israel’s agreement, around 500 Palestinians are currently being held under administrative detention among a total of nearly 6,000 Palestinians in Israeli prisons.