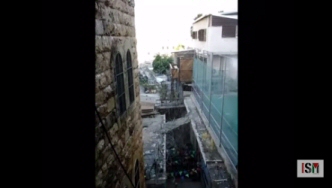 At 18:30 PM on the 29th of June 2015, masked settlers from the nearby illegal settlement of Beit Hadassah attacked Palestinian houses and souq (market) with a water hose and stones.

(Hebron) Shadi Sider, a Palestinian man, had to be hospitalized due to a stone thrown by a settler that hit him in the knee. The settlers attacked the Sider family home, the water went inside the living room, completely soaking the interior including a computer. During the attack, an Israeli settler arrived with an assault rifle. Israeli soldiers were present throughout the entire incident, they stood and watched but never intervened to stop the settler violence. They were standing above the Palestinian market, which they occupy.

Six children, all under the age of five years old, were present in the family home at the time of the attack; stones were also thrown at the property. This is not the first time that the family home has been attacked by settlers. Just last Saturday, the settlers sprayed water at the same home and threw stones. The Sider family home overlooks the settler basketball court and illegal settlement of Beit Hadassah.

Twenty Israeli soldiers were present in the souq after the incident today. They came into the Sider home, looked around, and left without speaking to Shadi Sider’s wife, whose home was just attacked by settlers. Time and time again settlers have attacked the Sider family home yet none of them are ever reprimanded for doing so.

Video provided to ISM by the Sider family.