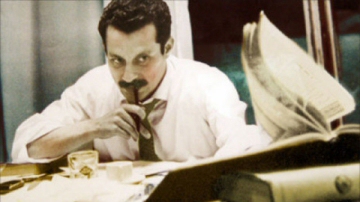 Thank to Kanafani the Palestinians started to believe more and more in their struggle. It is therefore easy to understand why the Israeli Mossad killed him: he was not just a writer, but a leader.On 8 July 1972, the Israeli Mossad murdered Ghassan Kanafani, of the most prominent Palestinian writers, intellectuals and political leaders. 43 years later we discuss with Nassar Ibrahim, author and Co-Director of the Alternative Information Center (AIC), about Ghassan Kanafani’s work, vision and heritage. Nassar was 14 years old at the time of the assassination of Kanafani.

For our generation, which experienced the Palestinian political movement splits in Syria, Jordan and Lebanon, Ghassan was one of the primary Palestian figures who affected our lives, culturally and morally.. He was born in Acca in 1936 and after 1948 his family became refugees and moved to Lebanon and Syria, where he finished his graduate degree in Arabic literature in Damascus. He began to teach refugee chidren; their memory of the Naqba was fresh and this experience greatly impacted the political structure of Kanafani.

Kanafani began to write in the 1950’s, when he was still very young. Prior to him, all the writings about the Naqba simply described how miserable and depressing were the lives of Palestinian refugees. With Kanafani’s personal story and works, however, we discovered another dimension: the resistance inside the Palestinians, both individually and as a community. He was the first writer who started to deal with the Palestinian question from a Palestinian dimension. He taught the Palestinians to discover themselves and their own resistance. The most important aspect is that he wrote of Palestinian refugees and resistance using literary criteria, and it is through this we discovered that each one is a hero and a resister. While you protect your life and your children, you are resisting. Although we are in the refugee camps, we still have Palestine in our memory and we are thus resisting. He taught us to preserve our memories. This was a main shift in the literature relating to the Naqba.

Ghassan described the reality and psychology of post-1948 exile, a time of permanent confrontation. The priority was to live, to eat, to protect the children: all these actions were resistance. Even when you die, it’s a kind of resistance. He showed how the daily Palestinian resistance is a popular resistance.

Ghassan Kanafani has a deep symbolic value for the Palestinians. While intellectuals are generally removed from the people, Kanafani united and combined literature and political visions, firstly in the Movement of Arab Nationalists (MAN) and later in the Popular Front for the Liberation of Palestine (PFLP) as a chief editor. And Kanafani was not just a writer but also an artist. He wrote his famous novel Men in the Sun during the first three years following the Naqba. It was a very critical novel through which thousands of Arabs started to discover how to deal with Palestinain demands.

His heritage is still fresh: the methodology he used, how he reflected daily life. His heritage is huge, and he wrote numerous stories, tales, novels, theatre pieces, researches and political articles. Kanafani’s writings were living, not the fruit of a lonely person and his work; they were expressions of a need to understand what was happening, as a person and collectively ,and this was crucial in a period between 1948 and 1967, during which Palestinians were terribly confused. Ever since Kanafani was a child, he wondered why Palestinians are in such a dramatic situation? He was also a political leader and had a deep comprehension of the strong and weak Palestinian points.

In his novel Umm Sa’ad, a woman refugee in Lebanon plants a vineyard following the 1967 Middle East War, symbolizing that although we as Palestinians are dying, one day we will awaken.

Kanafani strongly criticised the dependency of people on metaphysical forces. In the tale Blind and Deaf, he deals ironically with people’s expectations of miracles to heal them. Palestinians must resist, and this is the “miracle”: if we want to come back to Palestine, we must fight.

In Men in the Sun, Kanafani described three Palestinians trying to cross the border between Iraq and Kuwait to look for work. At the end of the novel, the men die in the water tank, while another was asking for permission to cross the border. After these events, he wonders: why didn’t they knock at the water tank wall? Yet the problem was who said they didn’t knock? And if they knocked, who would would hear and guarantee the police wouldn’t shoot them? These pages are highly symbolic when compared to the Palestinian condition.

In Palestinian history immediately following 1948, the first question was why the Naqba happened. The second stage, as suggested by Kanafani, is not to wait for a solution from the heavens but to fight and resist everyday. In Umm Sa’ad he clarified that in a refugee camp there is difference between tent and tent, the tent of UNRWA where people wait for food – a begging tent – and the tent where children learn how to fight – a resisting tent. There is a resisting tent and begging tent. Kanafani harshly criticised the leadership that did not stand in the front line of the resisting tent.

What does Ghassan Kanafani continue to teach nowadays?

If we follow Ghassan Kanafani, can we really say the Palestinians didn’t knock the tank? Who knocked the wall more than the Palestinians? If Kanafani was still alive, what would he say? I think even today he would not lose his optimistic attitude and that he would be directing more energies to critique the Palestinian internal structure and situation.

Palestinian people are waiting for the time to move again and because of that we now need more and more solidarity from outside. Thank to Kanafani the Palestinians started to believe more and more in their struggle. It is therefore easy to understand why the Israeli Mossad killed him: he was not just a writer, but a leader. Kanafani saved Arab literature through his blood. He gave it hounor through his blood. He gave us dignity again. Kanafani experimented with what he wrote, he paid the price.