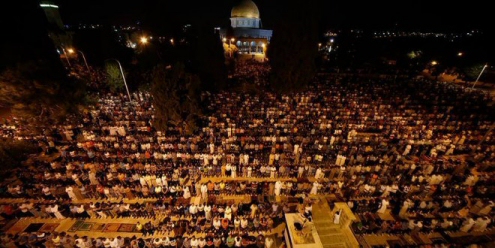 About 450 thousand Muslim worshippers flocked, Monday, to Al-Aqsa Mosque compound in East Jerusalem’s Old City to mark Laylat al-Qadr.Laylat Al-Qadr, meaning the Night of Power, takes place toward the end of the holy month of Ramadan. It is largely believed to be on the 27th, WAFA reports. According to Muslim belief, it marks the night the first verses of the Quran were revealed to Islam’s prophet Muhammad.

Throngs of Palestinian Muslims from across the West Bank flocked to mark al-Qadr Night in Al-Aqsa Mosque, passing into occupied East Jerusalem via Israeli military checkpoints at the city entrances and around the Old City.

Compounds and hallways of the Mosque were crowded with worshipers from all Palestinian cities and villages as well as Muslims from other countries.

The Islamic Endowment Authority provided over 150 thousands donated Iftar meals for worshippers.
Palestinians in the occupied Palestinian Territories (West Bank and Gaza) are subject to severe Israeli movement restrictions into East Jerusalem. However, Israel has eased restrictions ahead and during Ramadan, granting worshippers from certain age groups permits to access the city.

At the beginning of Ramadan, Israel allowed men above the age of 40, children under the age of 12 and women from all ages to enter the city without permits. It also granted permits to 500 to 800 Palestinians from the Gaza Strip to travel to the city via Beit Hanoun crossing, also known as Erez crossing.

However, Israel implemented new restrictions, revoking entry permits of hundreds set to travel and only allowing men over the age of 50, children under the age of 12 and women over the age of 30 to access the Mosque compound, purportedly in the wake of the latest string of attacks against Israeli soldiers and settlers.
Several hundred Palestinians, mostly elderly, were allowed to travel from the Gaza Strip into East Jerusalem via Beir Hanoun border crossing.