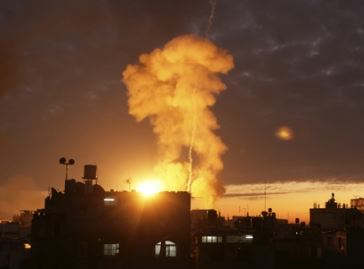 The Israeli Air Force carried out, on Thursday at dawn, two air strikes targeting sites in the northern and central parts of the Gaza Strip; the army claims it was responding to a rocket fired into an area in the Hof Ashkelon Regional Council.Palestinian sources said the army fired two missiles into the Civil Administration Office, in Jabalia town, in the northern part of the Gaza Strip, causing damage but no casualties.

The army also fired missiles into a site, used by an armed resistance group, in the al-Boreij refugee camp, in central Gaza, causing damage but no casualties.

Israel said the airstrikes came in retaliation to a shell that was allegedly fired from Gaza into the Hof Ashkelon Regional Council, approximately at 2 after midnight.

Israeli Ynet News said the Red Alert sirens were sounded in the Zikim area, certain parts of Ashkelon and the Hof Ashkelon Regional Council, causing no damage or injuries.

It added that the Israeli army held the Hamas movement in Gaza responsible for the attack.