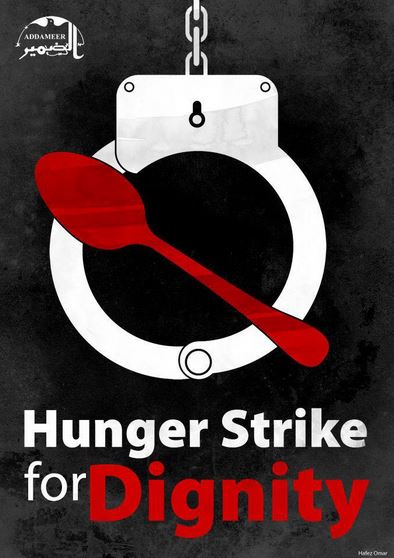 Head of the Palestinian Detainees’ Committee Issa Qaraqe has reported that three political prisoners, held by Israel, are ongoing with their hunger strikes, demanding an end to their illegal detention, and are currently held in solitary confinement.Qaraqe stated that detained lawyer Mohammad Allan, held in solitary confinement in the an Israeli prison in Beersheba (Be’er as-Sabe’,) started his hunger strike on June 14, 2015, and is facing a life-threatening health condition.

He added that detainee Adnan Esteity started his strike on the day of his abduction of June 29, and is held in solitary confinement in the Eshil Israeli prison in Beersheba.

In addition, Jordanian detainee Abdullah Abu Jaber started his hunger strike on July 20, demanding to be released and sent by back to Jordan.

He was taken prisoner 15 years ago, and was sentenced to twenty years.

Qaraqe held Israel responsible for the lives of the detainees, and demanded fast intervention to secure their release, and to end Israel’s illegal arbitrary Administrative Detention policies.