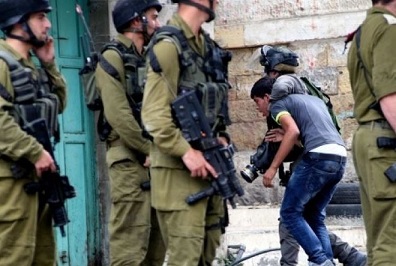 The two have been identified as Mo’taz Azmi al-Khadour, 17 years of age, and Othman al-Manasra, 18.

Soldiers also invaded homes in Hebron’s Old City, kidnapped a child identified as Anan Awni al-Ja’bari, 13 years of age, and took him to an unknown destination.

The army installed various roadblocks near Hebron’s northern entrances, and the main entrance of Sa’ir town, northeast of Hebron, stopped and searched dozens of cars, and inspected the ID cards of the passengers.

The Palestinian Prisoners Society (PPS) has reported that Amina ‘Amoudi, 68, was kidnapped while visiting her detained son in the Gilboa’ Israeli prison.

Her son, Mohammad, was taken prisoner in 2006, and was sentenced to twelve life terms, and twenty additional years.

In occupied Jerusalem, soldiers invaded various neighborhoods and searched homes before kidnapping a young man, identified as Mohammad al-Bayyoumi, and took him to the al-Maskobiyya interrogation and detention center, west of Jerusalem.

Another Palestinian was kidnapped in the al-‘Ezariyya town, south of Jerusalem.

The Israeli army also said soldiers also arrested three “wanted Palestinians, who participated in confrontations and clashes with soldiers and settlers,” south of Tulkarem, and in Hares village, southeast of Qalqilia, in the northern part of the West Bank.

An army spokesperson claimed two of the three detained Palestinians are members of the Hamas movement.

In related news, several military vehicles and an armored bulldozer invaded farmlands in Yasouf Palestinian village, east of the central West Bank city of Salfit, and bulldozed a recently established agricultural road, in the an-Nasba area, east of the village.

Ten days ago, soldiers invaded Yasouf and confiscated agricultural equipment and tools, used in the construction of the new road.