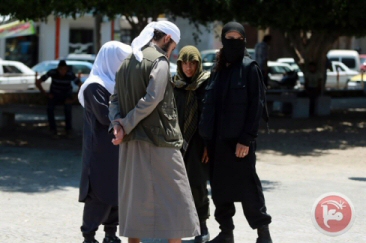 Salafi groups in the Gaza Strip threatened, on Monday, to fire rockets at Israel in response to what they called “Hamas crimes and conspiracies” against Salafis living in the region.The threat came in reaction to the arrest of militants suspected of targeting members of the armed wings of Hamas and Islamic Jihad Sunday with a series of bombings on Sunday.

According to Ma’an, the Salafi groups argued in a statement that Hamas’ security services were utilizing the recent attacks ‘to justify its arrest campaign” as an excuse for disproportionate targeting of Salafis.

‘The Salafis have decided to respond to these crimes and these blows dealt by Hamas by pointing rockets towards the occupation (Israel) and carrying out reprisals,’ the statement read.

“Hamas authorities raided homes of Salafi militants and carried out an arrest campaign hours after the explosions took place, considering that the explosions targeting leaders of the al-Qassam and al-Quds Brigades were ‘deliberate,” the statement said, referring to the armed wings of Hamas and Islamic Jihad respectively.

The groups added that at least 12 Salafi members had been arrested in the last few hours.

‘The results will be catastrophic, will benefit no one, and it will be Hamas who shoulders the responsibility,’ their statement said.

The threat comes amid a power struggle between Hamas and smaller extremist groups, including Salafis in Gaza, which is home to 1.8 million people and has been ravaged by three wars with Israel in six years.
On Sunday, five near-simultaneous explosions targeted members of the armed branches of Hamas and Islamic Jihad.

There was no immediate claim of responsibility for the blasts that rocked an area in Gaza City.
A series of such attacks in recent months is suspected to have been carried out by Salafis, some of whom claim links with the Islamic State group, although experts have expressed doubts over whether there are any true ties between them.

While Israeli leadership has championed alarm over an alleged spread of IS into the occupied West Bank and Gaza Strip, as of June 84 percent of Palestinians viewed IS as a radical group that does not represent true Islam, according to results of a poll conducted by the Palestinian Center for Policy and Survey Research.
There has been no confirmation from IS itself that it has a presence in Gaza.

In June, video footage alleged to be from an IS stronghold in Syria showcased a public challenge by the group against Hamas’ power in Gaza, accusing the Gazan leadership of failing to enforce stringent religious law in the strip.

Salafi groups have claimed in recent weeks that around 100 of their members or supporters were behind bars.
They also criticize Hamas for what they see as its lack of zeal in enforcing Islamic law as well as for its truce with Israel since last year’s war in Gaza.

Experts have warned that the appeal of extremist groups may be growing, particularly among Gaza’s disaffected youth who have been particularly hard hit by conflict, grinding poverty and soaring unemployment and feel let down by traditional Palestinian nationalist movements.

Growing extremism has led some to renew their call for an easing of the crippling Israeli blockade against the Gaza Strip in hopes that conditions will improve. Gaza’s border with Egypt also remains strictly controlled.