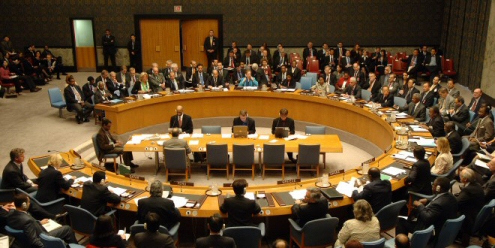 The Security Council met yesterday to discuss the humanitarian situation in Gaza. It was agreed that the current state of the Strip could not continue, and that the illegal Israeli siege must end as a prerequisite to speed up the reconstruction process.Speakers in the Council, which was convened yesterday by the United Nations (UN) in New York, called on the Permanent Mission of Malaysia to the UN, the Permanent Mission of the Hashemite Kingdom of Jordan, and the Arab member states of the Security Council, to support Palestinian national unity and the restoration of the Palestinian government offices in Gaza.

According to the PNN,. the Council discussed the humanitarian situation in the Gaza Strip and the responsibilities of the UN a year after the 2014 Israeli aggression in Gaza.

Malaysian ambassador Ramlan Ibrahim stressed the necessity of the UN taking responsibility for the continuing situation.

Jordanian ambassador Deena Qa’war said that the international community must address the root causes of the humanitarian situation in Gaza, the most important being the continued siege and violations of the ceasefire. She called on Israel to respect international law and commit to UN resolutions.

Security Council members discussed the worsening conditions in the Strip, caused primarily by repeated Israeli aggressions and the continued siege, which has stripped the Gaza residents of their right to freedom of movement, deprived them of their livelihoods and overshadowed their hopes for a better future.

Permenant Observer of Palestine to the UN, ambassador Riyadh Mansour, stressed the importance of this meeting, as well as the UN’s obligation to put pressure on Israel to lighten its siege and to end the Israeli occupation within a specified timeframe. He said that Israel needed to allow Palestine to achieve its independence within a two-state solution and relieve the suffering of the Palestinian people.

During the meeting, the Council heard a recorded message from Wafa al-Kafarna, a Gaza resident who was subjected to indiscriminate shelling by the Israeli forces in 2014.

The Council meeting is the second of its kind convened by the UN to discuss the Israeli-Palestinian conflict. The first was convened in 1997 and was concerned with occupied Jerusalem.