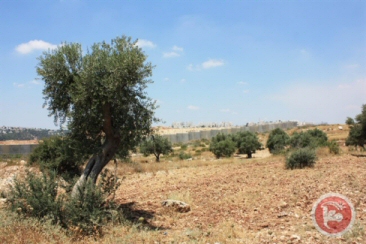 He called on the Palestinian Minister of Agriculture and Prime Minister Rami Hamdallah to help farmers re-plant trees.

Beit Ula’s village lands are predominantly classified as Area A and B under the Oslo Accords — partially under jurisdiction of the Palestinian Authority — while thewestern edges of the village are bordered by the Israeli separation wall and classified as Area C, under full Israeli civil and military control.

Even before January’s ruling, several thousand dunams of land were confiscated by the Israeli authorities in Beit Ula, according to the Applied Research Institute of Jerusalem.

Israeli forces and settlers attack olive trees in a bid to oust Palestinian farmers from their land, and a loss of a year’s crops can cause destitution for farming families.

Since 1967, approximately 800,000 olive trees have been uprooted in the occupied West Bank, according to a joint report by the Palestinian Authority and ARIJ.