8 Wounded by Israeli Forces at Funeral of Slain Palestinian 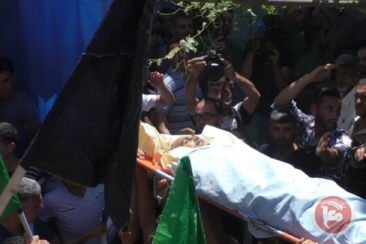 Israeli forces injured eight Palestinians in the occupied West Bank town of Beit Ummar, Thursday, as clashes erupted after the funeral of Falah Abu Maria, who was shot dead in his home, at dawn, during an Israeli arrest raid, witnesses said.Spokesman for a popular committee in the Hebron-area town, Mohammad Ayyad Awad, said that Israeli forces fired rubber-coated steel bullets and tear gas at funeral attendees.

The mourners received light to medium injuries, and three were transferred to hospitals in Hebron for treatment, he said.

One of the ambulances on site was hit by rubber-coated steel bullets fired by Israeli forces as it left the scene, shattering the rear window, Awad added.

According to Ma’an News Agency, Israeli forces had reportedly closed the entrances leading into Beit Ummar during the funeral procession, which was attended by hundreds of town residents.

Participants chanted slogans condemning the killing of Abu Maria by Israeli forces and demanding a response to the ‘crimes of the occupation against the Palestinian people.’

An Israeli army spokesperson had no immediate information but told Ma’an she would look into the incident.

Abu Maria was reportedly shot twice in the chest by Israeli forces after attempting to assist his son Mohammad, 22, who had been shot by the forces as they raided the family’s home early Thursday morning, according to witnesses.

An Israeli army spokesperson told Ma’an that the forces were conducting an overnight operation in Beit Ummar Thursday.

The spokesperson said that Israeli forces were ‘attacked by a violent mob’ when they attempted to arrest Mohammad, who was allegedly wanted on suspicion of security offences, adding that one Israeli soldier was injured with by a rock.

Israeli forces responded with live fire aimed at ‘lower extremities,’ injuring one man, the spokesperson said.
The spokeswoman could not confirm his identity but acknowledged that the wanted suspect was not taken into custody.

The spokesperson added that when Israeli forces were leaving the home of the first incident they were ‘attacked’ again, and again opened fire, killing one man.

Abu Maria is the 17th Palestinian to be killed by Israeli forces this year, three of whom have been killed since the beginning of this month.