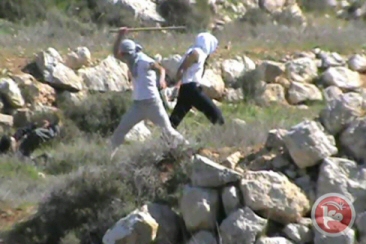 Khalid Maali, a researcher on settlement affairs, said that filling up the well is part of a larger plan to forcibly move people from Wadi Qana to clear the way for the expansion of illegal Israeli settlements.

Several illegal Israeli settlements surround Deir Istiya, the closest of which are Revava and YaqirI.

About 17 percent of Deir Istiya’s village territory is classified as Area B, according to the Applied Research Institute of Jerusalem, with the remaining 83 percent Area C, giving Israel full civil and military authority.

ARIJ said in a 2013 report that Deir Istiya ‘has been subjected to numerous Israeli confiscations for the benefit of various Israeli objectives,’ including the construction of settlements, outposts, checkpoints, bypass roads and the Israeli separation wall.

The report said that Israeli settlers living on the village’s land ‘have had a significant impact on Palestinian residents and their properties.’

Settler attacks have contributed to the loss of Palestinian lands and landowners have been barred from their plots, which have been fenced in with barbed wire and planted with trees, the report said.

It added: ‘Israeli settlers have also carried out a series of attacks against Palestinian landowners in an attempt to intimidate them and deter them from returning to their lands.’