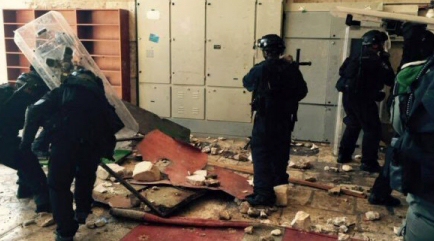 The Islamic Resistance Movement (Hamas) in Gaza, today, called for a wide demonstration in the West Bank next Friday (31/ 7/2015), in order to save Jerusalem and Al-Aqsa Mosque from near daily settler attacks.In an official statement, the movement said that this “Day of Rage” will be the response to the attack on Al-Aqsa Mosque, Sunday, when Israeli occupation police broke into the compound, vandalized it, fired rubber-coated metal bullets on worshipers and assaulted a number of youth.

In addition, more than 250 settlers broke into the mosque from Al Magharba gate.

Clashes ensued, during which about ten Palestinian worshipers and four Israeli police officers were injured, according to the PNN.

Hamas assured that the demonstration will launch after the Friday prayers in all cities, villages and camps in the occupied West Bank.

The day will raise the slogan that “Al-Aqsa is not a prey for Israeli attacks,” to retain its “victory.”