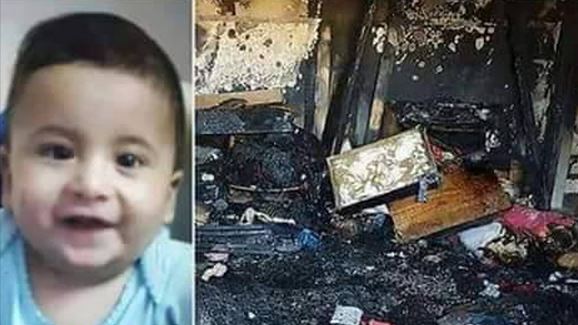 UN envoy to the “Middle East Peace Process” Nicholai Mladinov denounced the latest Israeli crime against a Palestinian family in the occupied West Bank, leaving an18-month old infant dead, and his family seriously injured after Israeli extremists firebombed their home as they slept.Mladinov said “the crime in Douma village, south of Nablus, is a terrorist crime that stresses the urgent need to end the Israeli occupation.”

He added that the crime carried a political motive, and demanded Israel to apprehend the killers who attacked the family with firebombs, and wrote “revenge” graffiti. He also and expressed his condolences to the family.

“I strongly denounce and condemn this criminal act; we should never allow such crimes, hatred and violence to continue to happen,” Mladinov added, “The killers must be apprehended, and prosecuted.”

Palestinian President Mahmoud Abbas also denounced the attack, and said the Israeli government is fully responsible for this crime.

Abbas: ‘Israeli Government Must Be Held Accountable for Baby’s Death In Nablus’

Presidency spokesperson, Nabil Abu Rodeina said, ‘the crime would never have happened without Israel’s protection of criminal fanatic settlers, and its ongoing construction and expansion of illegal settlements.’

The Hamas movement also issued a statement calling for ‘a proper retaliation to this crime,’ adding that the Israeli government is fully responsible due to its ‘ongoing violations, crimes and encouragement to the fanatic Israeli colonizers.’

It added that ‘this crime calls for a suitable retaliation,’ and that ‘the Israeli occupation soldiers and the settlers are legitimate targets for the resistance, at any given time, or place.’

‘The occupation and its settlers are a legitimate target at any time or place,’ Hamas spokesperson in exile Husam Badran said, ‘Those killers will never stop without a suitable retaliation.’

It also called on the Palestinian Authority to implement all its resolutions regarding national unity, and to stop the security coordination with Tel Aviv, and addition to filing the cases of all Israeli crimes to the International Criminal Court (ICC.)

On its part, the PFLP said ‘the Israeli crime in Nablus, and the death of the Palestinian infant, who was burnt to death, is a serious escalation, and a crime that requires all Palestinian factions to escalate their resistance against the occupation.’

‘The ongoing, ugly crimes against the Palestinians, especially the children, are part of this Israeli terrorism,’ the PFLP said, ‘Those are organized crimes; they never stopped and will continue to escalate.’

Assaf added that Israeli government officials and senior leaders of Israel’s illegal settlers’ movement, especially those who hold government positions, never ceased their incitement against the Palestinian people, ‘and the bloody outcome witnessed earlier today is a direct outcome of those policies.’

He further stated that the International community, and the International Criminal Court, ‘are now facing a real test; they either side by justice, act on prosecuting the criminals and end the Israeli occupation, or remain silent and declare their siding with terrorism.’

Israeli Prime Minister Benjamin Netanyahu said he was ‘shocked by the criminal act,’ and described it as a terrorist attack.

He added that he has ‘instructed the security forces to use all available means to bring the killers to justice.’