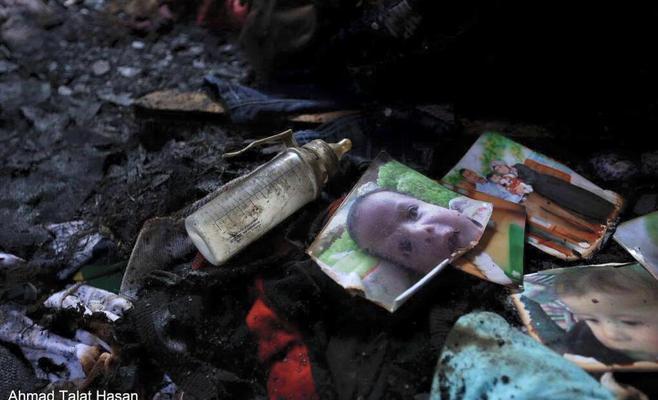 Several persons have been injured, Friday, after Israeli soldiers attacked the weekly nonviolent protest against the Annexation Wall and settlements, in Nabi Saleh village, near Ramallah.The protesters, accompanied by Israeli and international peace activists, marched towards the wall before Israeli soldiers started firing dozens of gas bombs on them, causing many to suffer the effects of tear gas inhalation. Army also fired rubber-coated metal bullets.

The protesters chanted against the deadly attack carried out by a group of Israeli fanatics against a Palestinian home near the northern West Bank city of Nablus, burning to death an 18-month old infant, identified as Ali Dawabsha,

The family home was burnt to the ground, causing severe burns to the baby’s four-year-old brother, in addition to his mother and father.

The protesters also called for apprehending the attackers.

This week’s protest also came in condemnation of the ongoing Israeli violations and invasions into the Al-Aqsa Mosque, in occupied Jerusalem.

Also on Friday, soldiers assaulted the protesters in Bil’in village, near Ramallah, causing many injuries, and burning Palestinian olive trees.