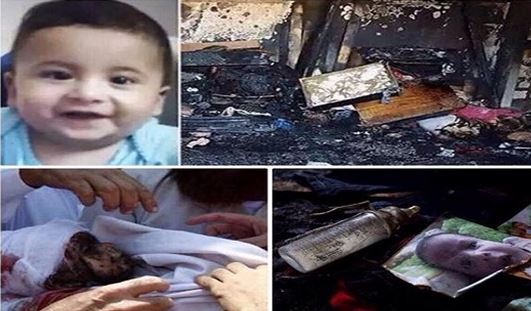 United Nations Secretary General Ban Ki-moon issued a statement, Friday, strongly denouncing the murder of a Palestinian baby, who was killed after Israeli extremists firebombed his home as he and his family were sleeping, killing him and seriously wounding his family.The UN head said the crime against the Palestinian family is a terrorist attack, and strongly denounced the Israeli Government of Benjamin Netanyahu for the lack of accountability and real investigations that could have prevented the attack.

“This situation, and the inability to apprehend and prosecute the assailants, the inability to punish them, and the state of insecurity, are leading to those repeated acts of violence,” Ki-moon said, “This has also led to the brutal murder of the Palestinian child.”

He demanded Israel to prosecute the assailants immediately, and called on both the Israelis and Palestinians to “act on deescalating the situation, in order to avoid further casualties.’

The international official further stated that “the absence of the Peace Process,” Israel’s illegal settlement activities, and the criminal attacks against the Palestinians and their homes “have led to the rise of extremism on both sides of the conflict.”

In addition, Ki-moon called on Tel Aviv and Ramallah to “conduct daring and serious measures to ensure the resumption of direct peace talks.”

It is worth mentioning that the latest Israeli escalation and assaults have led to the death of three Palestinians, including the baby, in 24 hours.

The autopsy of the murdered Palestinian baby, Ali Dawabsha, 18 months of age, has revealed he was burnt to death after the Israeli fanatics firebombed the family home.