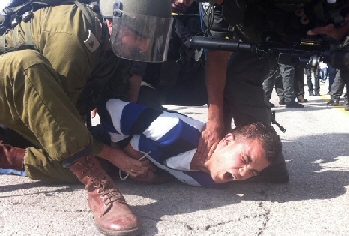 WAFA correspondence reported on the Fateh District Committee, in the East Jerusalem town of al-‘Issawiya, as saying that Israeli police raided the town, where they proceeded to detain three Palestinians after breaking into and ransacking their houses, sparking violent clashes with locals.

The detainees were identified as Ayoub, ‘Anan and ‘Allan ‘Ubaid.

Police also raided Hizma, a village to the north of the city, where they kidnapped one Palestinian male after breaking into his house. The detainee was identified as Muhammad Kan‘an.

In the meantime in Hebron, forces also abducted two Palestinians, a father and his son, after breaking into and ransacking their house in the Old City. The detainees were identified as Hasan An-Natsha, 51, and his son, Ma’moun, 14.

Forces set up checkpoints in the Qarantina locality of the Old City, where they stopped and examined Palestinian registered vehicles and inspected passengers’ identification cards.

Meanwhile, in the Jenin district, forces detained a Palestinian after storming his family’s house in Marka village to the south of the city. The detainee was identified as ‘Abdul-Ghani Mousa, 21.