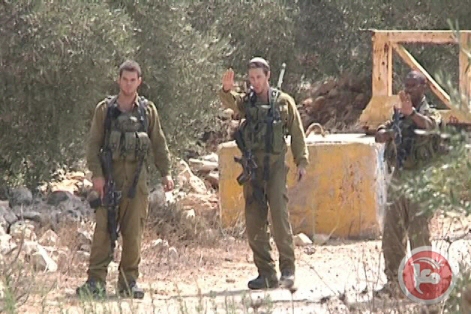 He said that the water supplies some 4,000 people living in Kafr Qaddum in Qalqilia, which he highlighted was an agricultural village.

He said that thousands of poultry birds have died due to a lack of water combined with extreme temperatures.
Jumaa said that they have not received any answer from Mekerot as to why the water was cut off or when it will be brought back.

The council head added that Mekerot provides water to all Palestinian villages and illegal Israeli settlements in the surrounding area.

Israelis, including settlers, have access to 300 liters of water per day, according to EWASH, while the West Bank average is around 70 liters, below the World Health Organization’s recommended minimum of 100 liters per day for basic sanitation, hygiene and drinking.

Kafr Qaddum has lost large swathes of its land to Israeli settlements, outposts and the apartheid wall, all illegal under international law.

According to the Applied Research Institute of Jerusalem, more than 10 percent of the village’s land has been confiscated for the establishment of the settlements alone — Kedumim, Kedumim Zefon, Jit, and Givat HaMerkaziz.

Residents of Kafr Qaddum stage regular protests, including a weekly Friday march, to protest land confiscations as well as the closure of the village’s southern road by Israeli forces.

The road, which has been closed 13 years, is the main route to the nearby city of Nablus, the nearest economic center.

Israeli forces regularly use violent means to suppress the protests.

IMEMC archive story: Thousands of Palestinians in Jerusalem Without Water