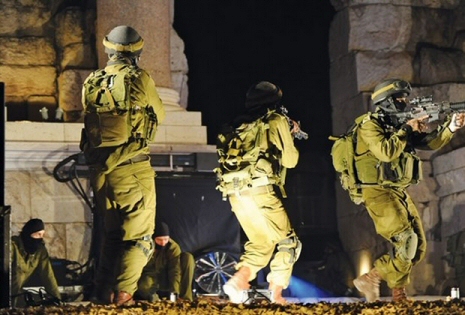 Witnesses spoke to Days of Palestine said that a number of Israeli military jeeps raided the city of Al-Khalil, south of the West Bank, where they took two Palestinian citizens from their beds.

Palestinian officials and popular sources said that Israeli forces stormed the cities of Ramallah, Nablus, Bethlehem and Jenin, upon which six were taken in Ramallah, four in Nablus, two in Bethlehem and one in Jenin.

Israeli forces regularly storm Palestinian cities and villages across the occupied West Bank, after giving orders to Palestinian Authority security services to withdraw from the streets and posts, and illegally seizing and detaining Palestinian citizens.

Before the eyes of PA security forces, armed Israeli settlers carry out attacks against unarmed Palestinian citizens, as with the latest aggression targeting the Dawabsha family, whose members were burnt while they were sleeping, last Friday night.