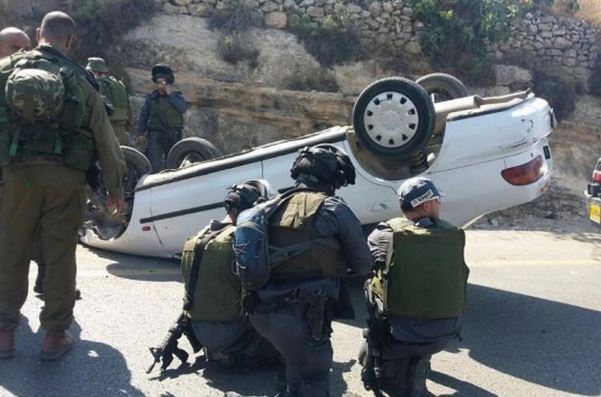 A large military force invaded Biddu village (northwest of Jerusalem) on Thursday evening to attack the home of a Palestinian who allegedly rammed Israeli soldiers deliberately with his car, and was then shot by an Israeli soldier. Palestinian witnesses confirm the incident was just an accident.Israeli media sources said three soldiers were wounded in the incident that took place near Sinjel village, on the Ramallah-Nablus road.

One of the wounded soldiers suffered a life-threatening injury, while the second suffered a moderate-to-severe injury and the third was mildly wounded.

Clashes took place between the invading soldiers and dozens of Palestinians near the home of the driver, Raed Mohammad Badwan, 46 years of age.

After the accident, the soldiers shot the driver with several live rounds, causing serious injuries, before he was moved to an Israeli hospital.

The invasion led to clashes between the soldiers and dozens of local youths who hurled stones and empty bottles on them; the army fired gas bombs, rubber-coated metal bullets and rounds of live ammunition.

Both Hamas and the Islamic Jihad movement issued statements said the incident ‘was a heroic attack,’ and that “the occupation and its army must pay a high price for their terrorism against the Palestinians, especially the children, in addition to all attacks against Palestinian lands, property and holy sites.”

After the terrorist Israeli firebomb attack on the Dawabsha family home in Douma village, near Ramallah, a week ago, resulting in the burning to death of a Palestinian baby, identified as Ali Dawabsha, 18 months of age, Israeli security and military officials say they believe Palestinian groups would step-up their attacks against Israeli targets.

Dawabsha’s parents remain in a very critical condition, while an improvement has been noticed in his little brother, who suffered burns in his legs.

One Year in ICU for Burned Child’s Family