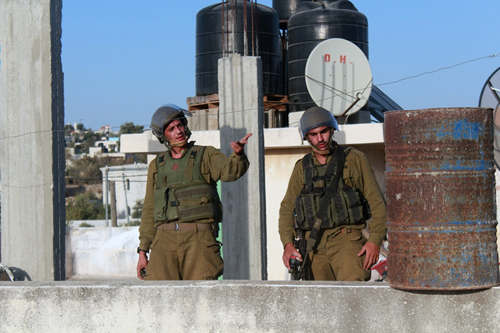 Scores of Palestinians suffered, on Friday evening, the effects of tear gas inhalation, after Israeli soldiers invaded Silwad town, east of the central West Bank city of Ramallah, and clashed with local youths. Soldiers also invaded homes near Jenin.Medical sources said the soldiers fired dozens of gas bombs at the protesters, and at various homes in the town, causing dozens of Palestinians, including entire families, to suffer the effects of teargas inhalation.

Eyewitnesses said the soldiers invaded a home in the town, and tried to force the family out, before occupying their rooftop to use it as a firing post and a monitoring tower.

In addition, dozens of soldiers invaded Umreeha village, in the Ya’bad area, southwest of the northern West Bank city of Jenin, broke into several homes before searching them, and used their rooftops as monitoring towers.

The soldiers also interrogated the families, and several youngsters, walking nearby the invaded homes, and withdrew later; no arrests were reported.