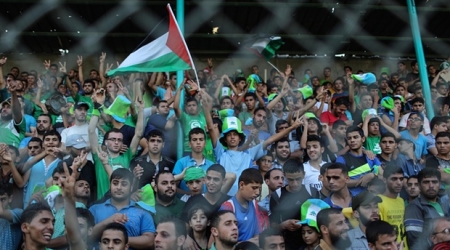 The Palestinian Football Federation has postponed the second leg of the Palestine Cup final, between the champions of the Gaza Strip and the West Bank, after Israel denied entry permits to some of the Gaza players, sports officials said.According to Al Ray, Gaza’s Shejaia Club needs approval to pass through an Israeli border crossing to reach the occupied West Bank city of Hebron, where today’s game with Al-Ahly was scheduled.

“It became clear seven people, including four players, were not on the list and therefore, the entire mission can’t leave Gaza without them,” said Ala Shammaly of the Shejaia media office.

Earlier this week, Gaza sports official Abdel-Salam Haniyeh said that the match was a milestone for Palestinian football, and could lead to unified competitions for Gaza and West Bank teams. Palestinians want the two territories to be part of a future independent state, together with occupied East Jerusalem as the capital.

“This is an achievement for the Palestinian sports family and is a first step towards a unified Palestinian league and cup tournament,” Haniyeh told Reuters, at a lavish reception in Gaza for the West Bank visitors.
“I am full of honour and pride, this is the first time I have ever visited Gaza and I can’t find the words to describe my feelings,” Al-Ahly forward Khaldon al-Halman said.

At the annual FIFA Congress, in May, Palestine threatened to call for a vote for Israel’s suspension from world football, but it dropped its motion at the last minute, and FIFA agreed to send observers to monitor the situation.

Palestinian football authorities have complained that Israel restricts the movement of players and officials to and from the occupied Palestinian territories.

Israel cites security concerns for the restrictions, although it says it has eased travel recently.