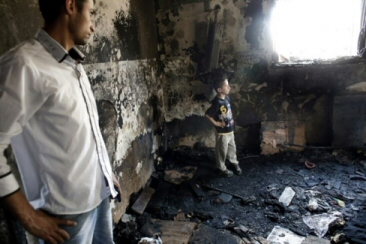 Israel has released all suspects detained in raids as part of a probe into the firebombing of a Palestinian home which killed an 18-month-old child and his father, Israeli authorities said Monday.They did not provide the number of those detained in the raids, early Sunday, in Jewish settlement outposts in the occupied West Bank, near the Palestinian village of Douma, where the July 31 firebombing occurred.

Outposts in the Israeli-occupied West Bank are notorious for housing young Jewish hardliners, referred to as ‘hilltop youth’.

‘All those arrested yesterday for interrogation have been released,’ a spokeswoman for the Shin Bet domestic security agency told AFP, without providing further details.

The raids came as Israel seeks to crack down on Jewish extremists following the firebombing that also critically wounded the toddler’s mother and four-year-old brother.

The attack has led to pressure on the government to act against Jewish extremists accused of being behind a series of hate crimes and nationalist attacks, including a stabbing attack at a Gay Pride parade in West Jerusalem, last month, which killed a 16-year-old girl and wounded five people.

Israeli Prime Minister Benjamin Netanyahu has labelled the firebombing ‘terrorism’ and pledged to use all legal means to track down the perpetrators.

However, many Palestinians have pointed out that Israeli government policies — including support for settlement expansion and frequent impunity for settlers — allowed for the firebombing to take place.

In addition to Sunday’s raids, three alleged Jewish extremists have been placed in a controversial form of detention without trial usually used for Palestinians.

The 100 or so Jewish outposts in the occupied West Bank are not officially recognized by the Israeli government but receive support and assistance from government ministries.

Since occupying the West Bank and East Jerusalem in 1967, Israel has built over 125 Jewish-only settlements across the territories with a settler population of over 500,000, in contravention of international law.