Jerusalem; Soldiers Kidnap A Woman And A Child, Near The Al-Aqsa Mosque 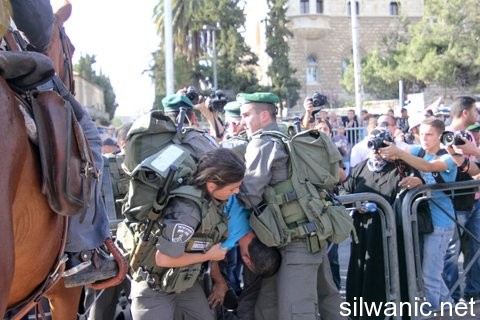 Israeli soldiers kidnapped, Tuesday, a Palestinian woman and a child near one of the gates of the Al-Aqsa Mosque, in occupied Jerusalem, and prevented dozens of summer camp children, and woman, from entering the mosque compound. The Wadi Hilweh Information Center in Silwan (Silwanic) has reported that the police and soldiers prevented more than 300 children from entering the mosque, and starting pushing many children around causing them to suffer anxiety attacks.

The Police also handed a list containing names of Palestinian women who are banned from entering the mosque.

Silwanic said the soldiers have kidnapped a woman identified as Seham Odeh, allegedly “for biting a female Israeli soldier,” and a child identified as Mohammad Morad al-Bayya’, 13, for what the soldiers said, “throwing eggs on them.

On Monday, Moayyad Hasheem, one of the guards of the Al-Aqsa Mosque suffered fractures in his arm after being attacked and detained, by the soldiers.

On Monday evening, soldiers kidnapped two children, identified as Mohammad Mahmoud Hajj, 11, and his brother Mo’taz, 12, allegedly after they threw stones on them. The two brothers were taken to the police station in Salaheddin Street.
Related: