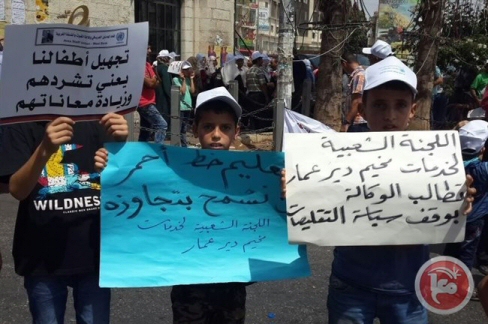 Palestinians in a number of refugee camps across the occupied West Bank, on Tuesday, reportedly closed main roads near the camps to protest a possible decision by the UN agency for Palestinian refugees to delay the school year.Ahmad Abu Kheiran, the head of a popular committee in the southern West Bank’s refugee camps, said that protesters used classroom chairs to block the roads.

He said that the protest was the first of many that would be carried out against UNRWA.

Abu Kheiran said that a possible delay to the school year, in addition to a wider reduction of UNRWA’s services, was a dangerous step that could lead to terminating the UN agency entirely.

Abu Kheiran made his comments a day after a Democratic Front for the Liberation of Palestine official in the Gaza Strip lambasted the UNRWA cuts.

Mahmoud Khalaf claimed that ‘the alleged financial crisis in UNRWA’ had been made up as a pretext to shut down the UN agency and undermine the Palestinian refugees’ right of return to land inside Israel from which they were expelled in 1948.

UNRWA was established in 1948 to provide relief to more than 700,000 Palestinians who were violently expelled from what became the state of Israel.

After nearly 70 years — with no solution to the Palestinian refugee problem — the UN General Assembly has repeatedly renewed UNRWA’s mandate every two years. The agency now attempts to provide basic needs to over five million Palestinians across the Middle East.

In recent months the agency has been struggling to secure donor funding, forcing it to scale back on its core services, including education, in addition to its emergency relief programs.

Last month, UNRWA said that unless funding was secured by the middle of August to cover a $101 million deficit, ‘the financial crisis may force the suspension of services relating to the Agency’s education program.’
‘This would mean a delay in the school year for half a million students attending some 700 schools and 8 vocational training centers across the Middle East.’

Earlier this month, UNRWA Commissioner-General Pierre Krahenbuhl said: ‘Nothing is more important for these children in terms of their dignity and identity than the education they receive. We are simply not allowed to let them down.’