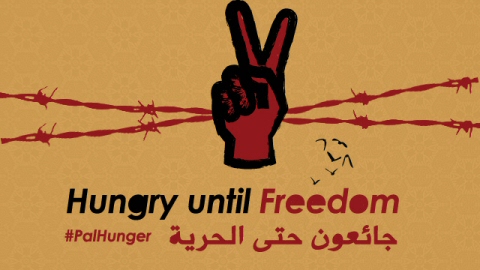 Palestinian prisoners are continuing their protests and resistance inside prison.This includes Muhammad Allan, the 31-year-old lawyer on hunger strike for 58 days to protest his administrative detention without charge or trial.

About 560 prisoners in Ramon and Nafha prisons are currently taking part in protests against recent violent raids, transfers and other conditions in the prisons; the prisoners intend to collectively escalate their protests over the next month. Their current protest actions include boycotting domestic work in the cells, refusing to answer to security checks or roll call, refusing to distribute meals and refusing to meet or deal with wardens.

The prisoners are demanding an end on the invasions and violent raids on cells; improvement of medical care for prisoners, including closing the Ramle clinic; cancellation of sanctions against hunger striking and protesting prisoners; the end of isolation and solitary confinement; restoration of family visits to all prisoners denied them; an end to arbitrary transfers; and the reactivation of Arabic television channels that were removed from prisoners.

These protests come alongside five ongoing individual hunger strikes, including the strike of Muhammad Allan, who is now in Barzilai hospital, shackled hand and foot to his hospital bed and threatened with force feeding. Allan is at severe medical risk and requires action to demand his freedom.

Musa Sufan of Tulkarem, has been on hunger strike since 18 July in protest against his isolation and demanding adequate and appropriate medical care. He has a diagnosis of cancer and has been denied family visits.

Fathi al-Khatib, 56, of Tulkaren, has been on hunger strike for 22 days in Ramleh prison clinic, demanding to see his grandchildren. He has been denied family visits regularly.

Abdul Majid Khdeirat is on hunger strike since 1 August, protesting his detention and attempts to reimpose his original sentence; he is a former prisoner released in the Wafa al-Ahrar prisoner exchange in October 2011 and since re-arrested.

Othman Abu Aram of al-Khalil has been on hunger strike since 29 July in protest against his transfer from Ramon to Gilboa prison, demanding that the transfer be revoked.

More stories, with relevant links and info, at the Alternative Information Center (AIC).