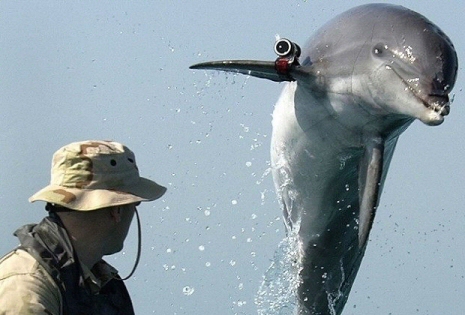 The military wing of Palestinian resistance movement, Hamas, has captured a dolphin sent by Israeli forces to spy on the Gaza Strip, it was reported on Wednesday.In a statement, Al-Qassam Brigades said that its diving unit had captured the dolphin several weeks ago, and had found cameras and other surveillance equipment attached to the animal.

The dolphin was believed to have been sent by the Israeli occupation to spy on the unit, which four of its members infiltrated an Israeli military outpost at the beginning of last year’s Israeli offensive on Gaza.

The spying equipment was reportedly found when the dolphin was removed from the water and checked, reports Days of Palestine.

Although Palestinians have no official state military force, the Hamas movement recently completed the reconstruction of its ‘naval commando force’ composed of dozens of trained divers whose purpose would be to attack strategic targets in Israel, according to Telesurf TV.

During the Israeli’s summer of 2014 disproportionate attacks on Gaza, most of the members were killed, according to Palestinian authorities, however Hamas has trained a new force whose role will be to protect the besieged enclave from further Tel Aviv attacks.

The divers were reported to have successfully penetrated within a kilometer of Israeli territory, last summer, near the military base of Zikim, in one of the resistance movement’s major achievements during the 50 days of fighting, between July-August 2014, during which over 2,130 Palestinians lost their lives and some 11,000 were injured. Most of the victims were civilians, including many children, elderly and women.