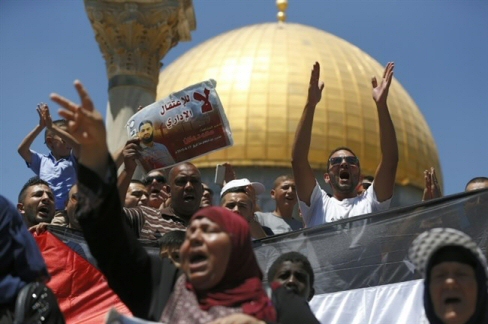 Ajwa added that Allan’s condition had improved slightly, but that his life remains in severe danger.

Doctors at Barzilai have decided to keep Allan in the ICU for several days because he requires intensive treatment in order for his health not to deteriorate further.

‘Now he’s awake. He’s very weak,’ Dr. Chezy Levy, the director of Barzilai hospital, told journalists. ‘He started to speak with those next to him.’

AFP further reports that Allan ended a two-month hunger strike Thursday that had put his life at risk and sparked intense debate over his detention without trial by Israeli authorities, his lawyer said.

‘Mohammad Allan regained consciousness and is not on hunger strike,’ Jamil al-Khatib told journalists of his 31-year-old client, after Israel’s top court late Wednesday temporarily lifted his detention without trial.

Khatib spoke after visiting Allan in hospital in the southern Israeli city of Ashkelon and said his health was improving, though he remained bedridden.

He was receiving vitamins and minerals intravenously.

‘He is in a good health condition and can communicate with others,’ Khatib said. ‘He can’t eat food in his mouth because it needs a while. Now he is drinking water and it will be gradual, and I imagine this will be next week.’

The Islamic Jihad group says that Allan, a lawyer from the West Bank, is a member of the Palestinian movement, as does Israel.

He has been held since November in a form of internment without trial known as administrative detention, which was temporarily lifted by Wednesday’s High Court ruling.

However, the court said he must remain in hospital pending a final decision on his case. The ruling left open the question of what would happen if or when his health improves.

Allan’s administrative detention was initially ordered by Israeli officials who claimed that he constituted a threat to security and was an activist in the Islamic Jihad group, according to prisoners’ rights group Addameer.

Islamic Jihad — along with the majority of Palestinian political organizations — is illegal according to Israeli military law.

In response to the move, Allan reportedly related to his attorney: ‘Administrative detention returns us to slavery, and therefore I refuse to be a slave to anyone.’

‘The truth is that I currently prefer hunger as long as freedom is the goal in the absence of law in Israeli courts. So, I found myself forced to fight this battle,’ he said at the time.

The end to Allan’s strike comes after Israeli authorities set forth previous offers in exchange for him to end his campaign.

The authorities proposed to extend his administrative detention only by two additional years or end his detention if he moved from the country, both offers the detainee reportedly rejected.