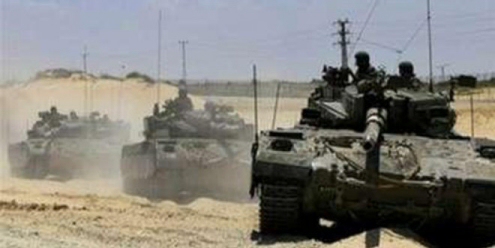 Eyewitnesses from Beit Hanoun city, northern Gaza Strip, on Wednesday, said that four Israeli tanks and three bulldozers entered the Strip, opened fire and razed civilian lands.Locals said that the vehicles entered more than 150 meters into the strip, and razed private lands, according to the PNN.

In the center of the Strip, Israeli soldiers in military watchtowers opened fire on farmlands, and a monitoring plane was seen to be roaming in the Beit Hanoun sky.

In addition to the invasions, Israeli soldiers open fire on civilian homes, target farmers and fishermen, especially near the Gaza borders.