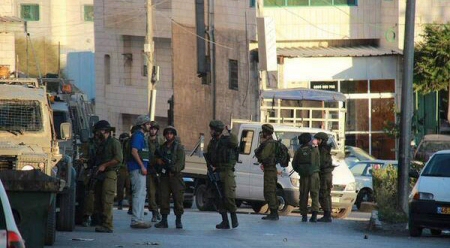 Israeli forces, on Friday morning, stormed Beit Ummar village, to the north of Hebron city, damaging materials and belongings at the home of Riad Sabarneh, after rummaging through its contents.Mohamed Awwad, coordinator of the Popular Committee Against the Wall and Settlements said that soldiers broke the main door of Sabarneh’s home, completely damaged the kitchen and destroyed other materials in the home.

Awwad added that the soldiers detained family members in a room and terrorized the children, causing daughter Diana (17) to faint. The soldiers also prevented the ambulance from approaching the home and aiding Diana.

Awwad also said that soldiers fired teargas grenades towards the citizens in town, causing a number of injuries and asphyxiations among them.

Forces claimed the youth were taken to investigation, but no more information was reported.