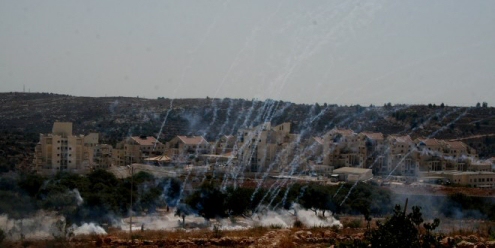 Israeli settlers, on Saturday, attacked citizens of Qasra village, to the south of Nablus, where dozens of Palestinians were either injured or suffocated by teargas.Settlers were accompanied by Israeli soldiers as they assaulted the villagers, PNN reports.

For their part, Israeli forces fired bullets, stun grenades and teargas toward the citizens.

Sources in the village said that citizens and popular committee guards confronted the settlers and prevented an attack on one of the shepherds and his sheep.

On a related note, one participant was injured and photographer was assaulted and banned from filming, during weekly protest against the Israeli occupation in Bil’in village, near Ramallah.

Iyad Bornat was injured as he was hit by two gas canisters in his back.

In addition, Rani Bornat, a photographer from the popular struggle committee, was also assaulted by Israeli soldiers who prevented him from filming the protest in its entirety.

Dozens of demonstrators suffered from tear gas inhalation after the Israeli soldiers showered them with hundreds of tear gas canisters.

The march was launched following Friday prayers, from the center of the village, in the direction of the apartheid wall.

Alongside the villagers of Bil’in, dozens of foreign activists from different countries participated in the march.

The participants raised Palestinian flags and chanted slogans calling for the end of the occupation, the liberation of Palestine and Palestinian prisoners.