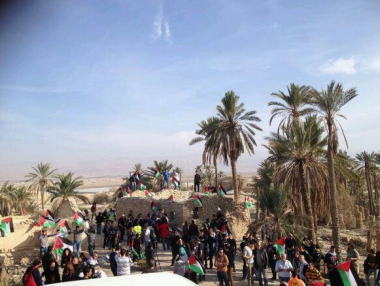 Dozens of Palestinians, headed by several Christians priests, conducted prayers on Palestinian lands that have been destroyed and uprooted by Israeli soldiers, in Beit Jala city, in the West Bank district of Bethlehem.Head of the Beit Jala City Council Nicola Khamis said the priests, the locals and various international human rights and Palestine solidarity activists gathered on the lands, carrying Palestinian flags, and signs condemning the ongoing and escalating Israeli violations and land theft.

Khamis added that the local priests held special prayers on lands that were recently bulldozed and uprooted by the Israeli army in Be’er ‘Ona, especially in Ahmad Valley, and called for real peace and justice.

The army bulldozed the Palestinian lands in order to continue the construction of the illegal Annexation Wall in the area.

The priests called on Christian countries and leaders, Christians around the world, and the International Community to intervene and stop the ongoing Israeli crimes and violations against the Palestinians, their homes and lands, and their holy sites.