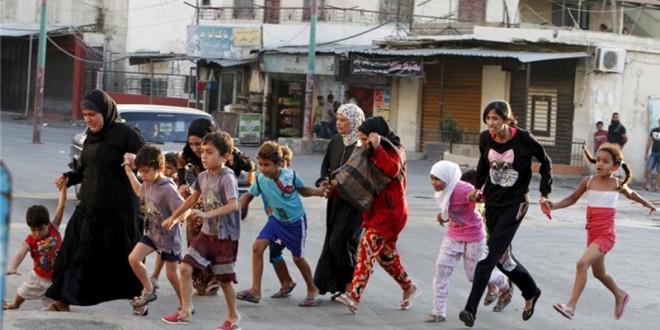 At least three people have been killed, and thousands displaced, in clashes between rival armed groups in Lebanon’s largest Palestinian refugee camp, Ain Al-Hilweh, near the southern port city of Sidon.The clashes sparked between the Jund al-Sham Islamist group and members of the Fateh movement, on Monday, in the northern part of Ain al-Hilweh camp, and quickly spread, xausing dozens of families to flee the camp in fear for their lives.

According to the PNN, sources told Al Jazeera that three killed were on Fateh’s side. Several others were wounded and rushed to hospitals in Sidon.

Al Jazeera said that it was unclear just what sparked the clashes, and each side blamed the other.

The escalating rivalry between Jund al-Sham and Fateh has erupted into clashes several times over the past few months.

On Saturday, two Fatah members were killed when members of Jund al-Sham tried to kill a leading Fateh official.

Ma’an News Agency reported that thousands of Palestinians have been displaced by violent clashes in the camp.

“Ambulances have not been able to enter the camp because of the intensity of the fighting, and because they’re happening near the camp’s entrances,” one Palestinian source inside the camp told the AFP news agency, speaking on condition of anonymity.

UNRWA spokesman Christopher Gunness said that armed clashes in the camp have had a serious impact on the Palestine refugee community.

Despite reports of a ceasefire, as many as 3,000 Palestinians may have been displaced, Gunness said, with UNRWA having limited access and movement in and around the refugee camp.

‘We are deeply concerned over reports that civilians are endangered and that our installations have been directly affected by the fighting,’ he said.

‘UNRWA condemns any armed group that fails to respect its obligations under international law to protect civilians and to respect the inviolability of United Nations premises.’

UNRWA, with its partners, has mobilized a humanitarian effort to provide food, medical assistance and shelter, and will continue to monitor the situation, Gunness added.

More than 450,000 Palestinians are registered in Lebanon with UNRWA. Most live in squalid conditions in 12 official refugee camps and face a variety of legal restrictions, including on their employment.

According to the PNN, the impoverished Ain al-Hilweh camp is home to more than 100,000 refugees, and has gained notoriety as a refuge for fugitives and for the settling of scores between factions.

The Lebanese army does not enter the camp, under a tacit deal agreed after the 1975-1990 civil war. Palestinian factions are responsible for security.