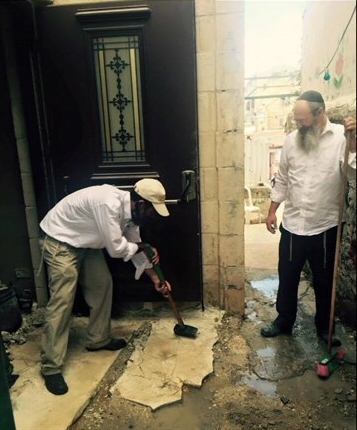 Palestinian residents of the Old City, in occupied East Jerusalem, clashed with Israeli forces on Tuesday, as settlers began construction work on a new door for a synagogue, locals said.Activist Alaa al-Haddad told Ma’an News Agency that Jewish settlers in the Old City tore down a brick wall and began building a door for synagogue which leads directly into a private alley belonging to the Awad family.

‘After the wall had been torn down, it was revealed that the settlers had already prepared a new wall with a steel door already installed behind the brick wall,’ he said.

Palestinian residents say that the new door will affect access to their homes and impose restrictions on their freedom to move in the area.

Scuffles broke out with Israeli police at the scene, who reportedly threatened to use tasers on the residents.

East Jerusalem was occupied by Israel in 1967 in a move never recognized by the international community, and four decades of Israeli policy in the area have neglected the Palestinian community while fostering the growth of Jewish settlements.