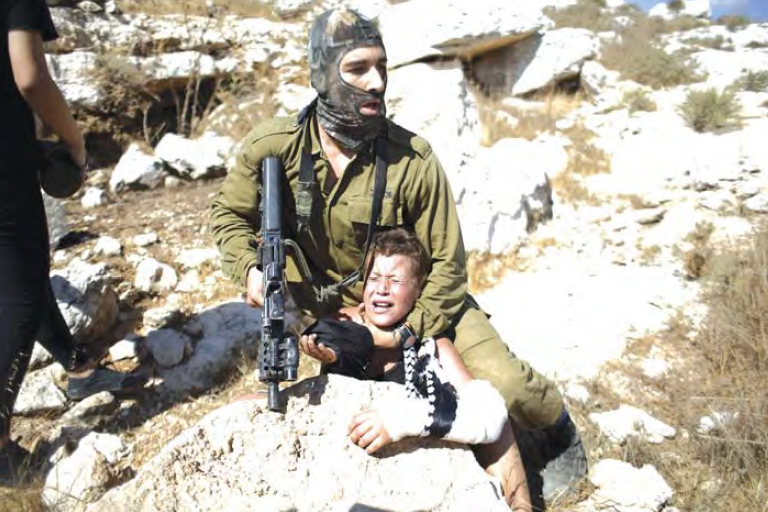 Israeli forces also stopped rehabilitation work in an archaeological site in the vicinity of Bani Na’im village, east of Hebron, while Israeli settlers set fire to a bulldozer in al-Mazra’ah al-Qabaliyah village, northwest of Ramallah.

In addition, a house was shelled and then completely levelled by an Israeli bulldozer in Jenin. In a large-scale military operation that Jenin has not witnessed for years, Israeli forces moved into the city and its refugee camp on 31 August 2015 to arrest allegedly wanted Palestinians. They raided a house belonging to the secretary of the Jenin’s Mayor and took his family outdoors. Moreover, they abducted the aforementioned person, his brother, son and mother. Israeli forces afterwards fired 4 shells at the house. A bulldozer started demolishing the house, the fence around it and a well used for collection of rainwater. The child and his grandmother were released later.

Many checkpoints were established in the West Bank. 3 Palestinian civilians were abducted at checkpoints.

8 shepherds were maltreated and an old woman was beaten by Israeli soldiers, east of Nablus.

In the Gaza Strip, in the context of targeting Palestinian fishermen, on 29 August 2015, Israeli gunboats stationed off al-Wahah shore, north of the Gaza Strip, sporadically opened fire at fishermen sailing within 2 nautical miles, but neither casualties nor material damage were reported.

Israel has continued to close the Beit Hanoun (“Erez”) crossing for the majority of Palestinian citizens from the Gaza Strip. Israel only allows the movement of a limited number of groups, with many hours of waiting in the majority of cases. Israel has continued to adOccupied Palestinian Territories a policy aimed at reducing the number of Palestinian patients allowed to move via the Beit Hanoun crossing to receive medical treatment in hospitals in Israel or in the West Bank and East Jerusalem. Israel also continued applying the policy of making certain civilian traveling via the crossing interviewed by the Israeli intelligence service to be questioned, blackmailed or abducted.

In the context of the forcible displacement policy applied in Area (C) in the West Bank for the interest of settlement projects, on 31 August 2015, Israeli forces demolished ‘al-Khdeirat’ Bedouin community, northeast of occupied East Jerusalem near ‘Adam’ settlement, rendering eleven Bedouin families homeless.

According to investigations conducted by PCHR, at approximately 09:00 on Monday, 31 August 2015, Israeli forces, backed by military vehicles and accompanied by a force from the Construction and Organization Department in the Civil Administration and bulldozers, moved into al-Khdeirat Bedouin community near ‘Adam’ settlement overlooking Mekhmas village and ‘Sha’er Benyamin’ settlement, northeast of occupied East Jerusalem. The Israeli bulldozers demolished a number of residential and livestock barracks (16 residential barracks and 7 livestock barracks) leaving 94 persons, including 69 children, homeless.

Israeli forces continued to use excessive and systematic use of force against peaceful protests organized by Palestinian civilians and Israeli and international human rights activists in protest at the construction of the annexation wall and settlement activities in the West Bank and Israeli policies in the Occupied Palestinian Territories. As a result, 9 civilians, including 3 children, were wounded in Kufor Qaddoum protest, northeast of Qalqilya; Silwad protest, northeast of Ramallah; and the vicinity of Ofer detention facility, southwest of the city.

Following the Friday prayer on 28 August 2015, dozens of Palestinian civilians and international and Israeli human rights defenders organized a peaceful demonstration in Bil’in, west of Ramallah, in protest against the annexation wall and settlement activities. protestors tried to sneak the fence. Israeli soldiers stationed behind the wall, fired live bullets, rubber-coated steel bullets, tear gas canisters and sound bombs and chased them into the olive fields and into residential houses in response. As a result, many civilians suffered tear gas inhalation and others sustained bruises as Israeli soldiers beat them. Moreover, Israeli forces abducted the head of the Popular Committee against the Annexation Wall and Settlement Activities in Bil’in, Iyad Bournat, 43, after they beat him causing bruises to his chest, and a photographer of the Popular Committee, Hamza Bournat, 23. The two were taken to Benjamin police station, east of occupied Jerusalem. They were released at midnight.

On the same day, dozens of Palestinian civilians organized a peaceful demonstration in the center of Ni’lin village, west of Ramallah, in protest against the Annexation Wall and Settlement Activity. The demonstrators took the streets and headed to the annexation wall. Israeli forces prevented the demonstrators from crossing to the land behind the Annexation Wall, so they threw stones at them. Israeli soldiers fired live bullets, rubber-coated metal bullets, sound bombs and tear gas canisters at the civilians, and chased them into the village. As a result, many civilians suffered tear gas inhalation and others sustained bruises as Israeli soldiers beat them.

Around the same time, dozens of Palestinian civilians and Israeli and international human rights defenders organized a peaceful demonstration in al-Nabi Saleh village, southwest of Ramallah, in protest against the annexation wall and settlement Activity. The demonstrators headed to the lands that the settlers are trying to rob by force near “Halmish” settlement. Israeli forces had closed all the entrances of the village since the morning to prevent them from participating in the demonstration. When they arrived at the aforementioned land, the demonstrators were met by live bullets, tear gas canisters, rubber-coated steel bullets, sound bombs and were chased into the village. . As a result, many civilians suffered tear gas inhalation and others sustained bruises as Israeli soldiers beat them after an Israeli soldier attempted to arrest a 12-year-old Palestinian child, beating him on his broken left arm and hitting his head at a rock then eventually attempting to strangle him. Furthermore, the same Israeli soldier assaulted against a 14-year old, the boy’s sister and his mother, 40, and another woman, 46, when they tried to prevent the detention of the boy. In addition, Israeli forces abducted an 18-year-old Palestinian youngster, and unidentified international solidarity activist.

At approximately 17:00 on Saturday, 29 August 2015, Palestinian civilians and international solidarity activists organized a protest in the center of Kufor Qaddoum village, northeast of Qalqilya, heading to the eastern entrance of the village in protest against closing that entrance since the beginning of al-Aqsa Intifada with an iron gate. When they arrived at the entrance of the gate, the demonstrators were met by live bullets, tear gas canisters, rubber-coated steel bullets, sound bombs. As a result, an 18-year-old youngster was wounded by a bullet to the right leg.

In addition, PCHR calls upon the Parties to international human rights instruments, especially the Covenant on Civil and Political Rights and the Covenant on Economic, Social and Cultural Rights, to pressurize Israel to comply with their provisions in the Occupied Palestinian Territories, and to compel it to incorporate the human rights situation in the Occupied Palestinian Territories in its reports submitted to the concerned committees;