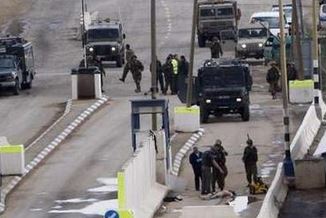 Palestinian medics arrived at the scene, and transferred him to the Rafidia Governmental Hospital.

In addition, soldiers kidnapped two young men after stopping them on the Za’tara roadblock, south of the northern West Bank city of Nablus.

On Saturday at dawn, a young man was injured after a number of Israeli extremists assaulted him, in Hebron.