Peaceful Activism In Palestine: They Tried To Kill Me 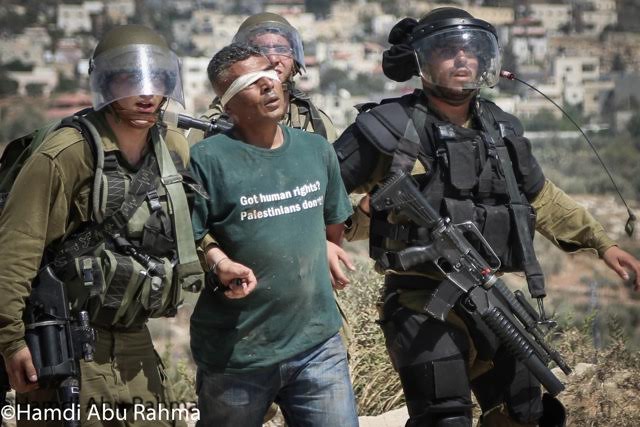 Friday 28th August afternoon we went to our weekly demonstration, against the theft of our land and apartheid wall, in Bil’in. We have been doing this non-violent demonstration for 10 years.As usual the soldiers were waiting for us in front of our village but this time from the start of the demonstration we could feel that there was something different from the usual initial bombardment of tear gas from the soldiers jeeps.

To begin they fired a smaller amount of gas towards the peaceful demonstration, but as the march continued towards site of the old segregation wall the soldiers ambushed us and held me at gunpoint, threatening to shoot.

The soldiers tied my hands far too tight behind my back, the plastic ties cutting into my skin. Still with their guns aimed at me, I was brutally beaten by five or six soldiers with sticks and they bound my eyes with blindfold material soaked with pepper spray.

I did not resist, any resistance against these type of soldiers would just lead to more of a beating or worse.

After the beating, in agony, the soldiers walked me to their jeep on the other side of the separation wall surrounding the illegal settlement close to our village. I was in great pain and could feel that the soldiers had done to me some real damage. I pleaded with the soldiers to speak with their commander as I could feel a lot of pain in my chest and needed to visit the hospital.

The soldiers then just laughed and mocked me saying that there is no hospital for ‘terrorists’. They lied to me that they would take me to the hospital after they had taken me to the police station. On arrival at the police station, still cuffed and blindfolded, I again told people there that I needed to see a doctor but no one would listen.

I was held from 2.p.m until midnight without charge and still with no access to medical care, all the while with pepper spray burning my eyes and the ties slicing my wrists.

When they finally released me and my cousin Hamza, who was arrested for photo documenting the days events, they threw me out on to the street and told me that I had to call for an ambulance myself.

Hamza called the ambulance as I was exhausted and unable to move with the pain. The ambulance arrived in around 20 minutes and took me to Ramallah hospital where they treated me and told me that I have two broken ribs in my chest, along with heavy bruising all over my body.

They gave my medicine and I was told that they cannot do anything to treat the broken ribs.

I have been arrested and injured many times during our struggle against the illegal settlements and theft of our families land, but this time I felt that the Israeli soldiers wanted to kill me.

They have done a lot of things over the years to try and break us and the spirit of the village, especially targeting me and my family.

This is how the Israelis use violence to threaten and scare my family, hoping that we will break and give up resisting the occupation and give up on the land we depend on.

The oppressor must understand that every bullet and beating towards us does not make us weak, but strengthens our resolve and brings us closer together.

We will not give up, we will resist until they tire of using violence against us. I will continue to fight for our freedom, for a better future for my children and for all children.

As soon as I am fit and able to attend, I will return to our weekly protest and continue to demonstrate against the aggression we face in our everyday lives.

This article was originally published on Iyad Burnet’s Facebook page