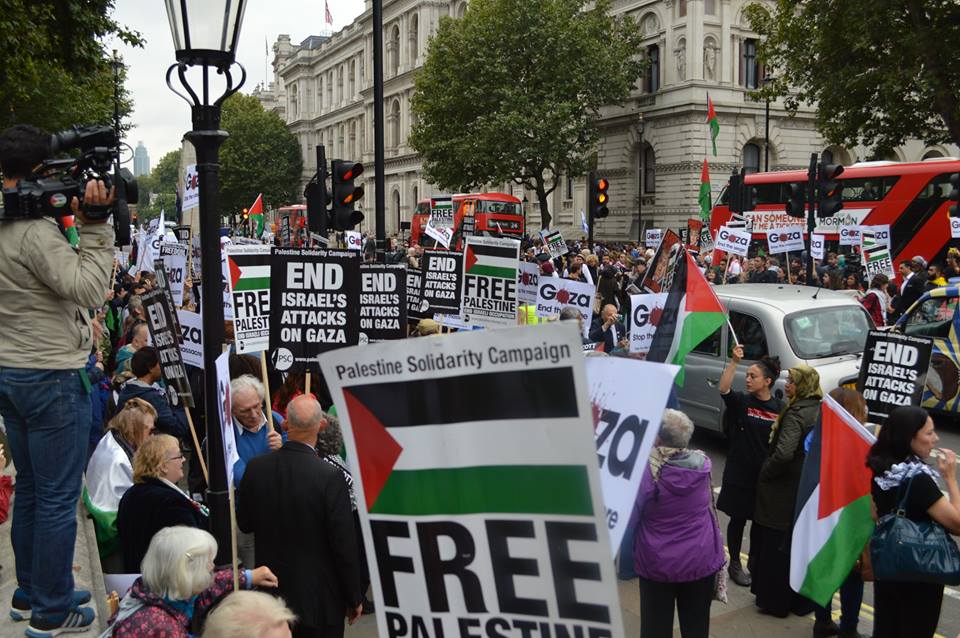 Around 2,000 protesters filled the streets of London as Israeli Prime Minister Benjamin Netanyahu arrived in London today to meet the British Prime Minister, David Cameron.In addition to the protest, over 10,000 people signed a letter to David Cameron, calling for immediate sanctions and an arms embargo on Israel. The letter was delivered to Downing Street ahead of Netanyahu’s visit.

According to the Palestine Solidarity Campaign, protesters blocked the road and pavements outside Downing Street, as speakers including SNP (Scottish National Party) MPs Tommy Sheppard and Stuart McDonald addressed the crowds. Hugh Lanning, Chair of Palestine Solidarity Campaign, which organised the protest, also spoke and said it was a disgrace that the British Prime Minister was welcoming a war criminal to London.

Baroness Jenny Tonge, Richard Kruper, from Jews for Justice for Palestinians, and Kate Hudson of the Campaign for Nuclear Disarmament, were also among the speakers.

Protesters chanted “Refugees in, Netanyahu out” at the gates of Downing Street. Others wore masks of Cameron and Netanyahu and held photos of some of the Palestinians killed in Israel’s assault on Gaza last summer.

The day before Netanyahu’s arrival, the Palestine Solidarity Campaign had a letter published in the Guardian, denouncing his welcome in the UK by Cameron.

The letter added: “Palestinians fleeing the hell that Israel has created in Gaza are among the thousands of refugees who have drowned in the Mediterranean in the last year. Our prime minister should not be welcoming the man who presides over Israel’s occupation and its siege of Gaza.”