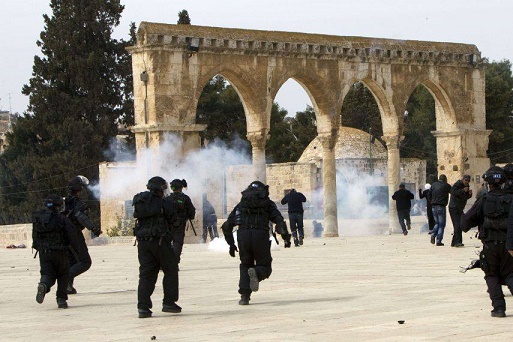 Groups of Israeli extremists, accompanied by dozens of soldiers and police officers, continued their invasions into the Al-Aqsa Mosque, in occupied East Jerusalem, through the al-Magharba Gate, after the army forcibly removed most of the Palestinian worshipers, and assaulted dozens. The soldiers attacked dozens of Palestinians, including women, near the Chain Gate of the Al-Aqsa Mosque, while a young man, identified as Tamer Khalaf, 29, suffered various cuts and bruises after the soldiers repeatedly beat and struck him, and sprayed his face with pepper-spray before kidnapping him.

In addition, soldiers kidnapped Omar Wazwaz, and a Palestinian woman, near the Chain Gate, and took them to an interrogation facility in the occupied city.

The army turned the Old City of occupied Jerusalem into a closed military zone, while hundreds of soldiers and police officers continued their extensive deployment in every part of the city, in addition to preventing all young men, young and old women, and students from entering the Al-Aqsa Mosque courtyards.

Earlier on Monday morning, undercover soldiers and regular units stormed the Al-Aqsa Mosque, and fired dozens of concussion grenades, gas bombs and rubber-coated steel bullets, causing several injuries, including an elderly man who was shot in the eye, and kidnapped seven Palestinians.

The Jerusalem Affairs Department of the Palestine Liberation Organization (PLO) condemned the Israeli escalation in Jerusalem, especially the invasions into the Al-Aqsa Mosque and the Dome of the Rock.

It warned of the consequences of the Israeli attempts to control the mosque, and divide it, in an attempt to completely control it, and called on the Arab and Islamic Countries in addition to the International Community to act on stopping the dangerous Israeli escalation.