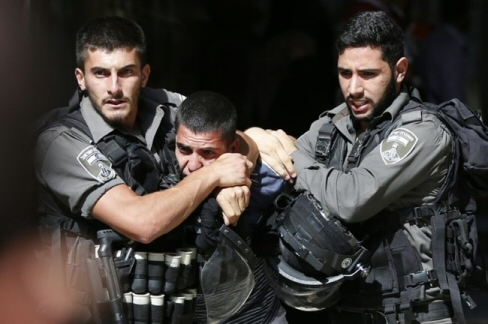 Clashes broke out in the neighborhoods of occupied East Jerusalem for the third consecutive day, on Thursday, as tensions continue to run high following increased violence at the Al-Aqsa Mosque compound, according to locals.The most intense clashes erupted in the neighborhoods of al-Isawiya and the Shufat refugee camp, with additional reports of clashes in the al-Tur area.

Israeli forces arrested eight Palestinians from Jerusalem overnight Wednesday and throughout Thursday, including four boys under the age of 12.

A local committee member, Muhammad Abu al-Hummus, said Israeli forces who stormed the neighborhood reportedly used live-bullets during clashes in al-Isawiya , shooting and injuring one young Palestinian in the leg.

His condition is unknown.

At least 25 other protesters were injured with rubber-coated steel bullets during the clashes.

Furthermore, Israeli forces stormed the village’s cemetery and deployed soldiers on rooftops.
Dignitaries, parent committees, and national and Islamic groups met on Thursday and agreed that all institutions in al-Isawiya would go on strike in protest against ‘Israeli police attacks.’

Separately, in Shufat refugee camp,Thaer Fasfos, the Fatah spokesman for the camp, said that violent clashes also broke out between Palestinians and Israeli forces.

Fasfos said that three Israeli soldiers were injured by stones and were given emergency field treatment.

An Israeli army spokesperson had no record of the incident.

Clashes also spread to the nearby al-Tur village, where witnesses reported that Israeli forces deployed on the main street of the village, firing stun grenades and rubber-coated steel bullets, and detaining two Palestinian youth from the village.

Clashes between Israeli forces and Palestinians in occupied East Jerusalem occur on a near-daily basis, but tensions have been increasingly high as violence at the Al-Aqsa Mosque compound has escalated in recent weeks.

Palestinians fear that Israel is seeking to change rules governing the Al-Aqsa Mosque compound, with far-right Jewish groups pushing for more access to the compound, and even efforts by fringe organizations to erect a new temple.

The compound, along with the rest of East Jerusalem, has been under Israeli military occupation since 1967, and the international community has condemned Israeli policies preventing Palestinian expansion in the area.