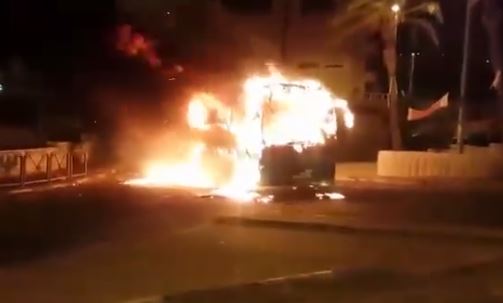 Clashes resumed, on Thursday evening, in various villages and towns, and in a number of neighborhoods, in occupied Jerusalem, as part of the ongoing protests to the escalating Israeli attacks and invasions into the Al-Aqsa Mosque. Member of the Follow-up Committee in the al-‘Isawiyya town, in Jerusalem, Mohammad Abu al-Hummus, said dozens of soldiers invaded it, and fired many gas bombs and concussion grenades, leading dozens of residents to suffer the effects of tear gas inhalation.

He added that several trees, located in a land inside a military base near the Hebrew University, were burnt during the clashes.

Israeli daily Haaretz has reported several Palestinians hurled stones on the bus, causing the driver to escape leaving the empty vehicle in the street, before the youths burnt it.

Haaretz added that, on Thursday at night, an Israeli bus driver was injured after stones were hurled on the vehicle, close to the Hizma roadblock, at Jerusalem’s northern entrance.

The soldiers then invaded several neighborhoods in Hizma town, and conducted a search campaign, but withdrew 30 minutes later without conducting any arrests.

More clashes took place in the Shayyah area, in Silwan; the soldiers fired dozens of gas bombs, and sprayed homes with wastewater mixed with chemicals.

Similar clashes occurred in the at-Tour town, in Jerusalem, leading to no arrests or injuries.

Meanwhile, Israel decided to push more soldiers and police officers in East Jerusalem, especially around the Al-Aqsa Mosque, in preparation for Friday prayers.

Haaretz said around 800 additional police officers will be deployed around the mosque, and the Old city, and that all Palestinian men, under the age of 40, will be denied access to the mosque.

Jaffa Demonstrates in Protest of Israeli Violations against Al-Aqsa