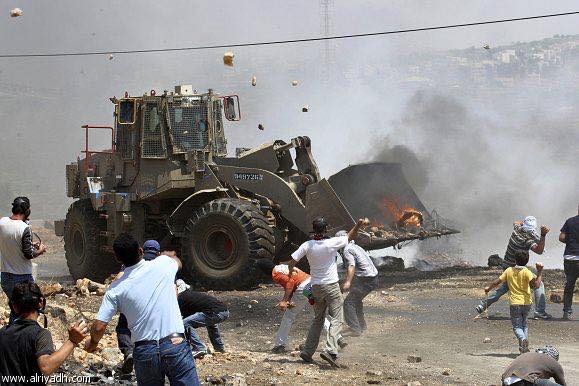 The Popular Committee against the Wall and Settlements in Kufur Qaddoum, near the northern West Bank city of Qalqilia, has reported that Israeli soldiers used excessive force against the weekly protest, wounding three, including a child, with live rounds, while dozens suffered the effects of tear gas inhalation.Morad Eshteiwy, coordinator of the Popular Committee, said the soldiers invaded the town, fired rounds of live ammunition, gas bombs, and rubber-coated steel bullets on the nonviolent protesters, leading to clashes.

In addition, dozens of Palestinians suffered the effects of tear gas inhalation, after the soldiers showered the village with gas bombs, also targeting many homes.

The villagers in Kufur Qaddoum have been holding weekly protests, demanding an end to the Israeli violations, illegal colonies, and the reopening of the main road that has been blockaded by the soldiers for the fourteenth consecutive year.

The army closed the road to enable easy access for the settlers driving to and from the illegal Kedumim colony, built on Palestinian lands.