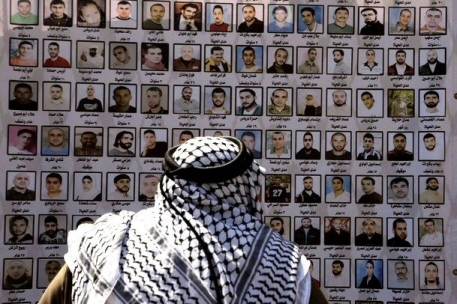 Seven Palestinian administrative detainees currently held by Israeli authorities, in solitary confinement, continued a hunger strike for the 30th day in a row, Saturday, the Prisoners’ and Former Prisoners’ Affairs Committee said.The seven are still being held in solitary confinement despite the deterioration of their health, the committee said, adding that the move is a tactic aimed to forcibly break their strikes.

The hunger strikers have lost significant weight, are not capable of moving or standing up, and are suffering from severe pain.

The committee added that Palestinian prisoners in several Israeli jails rejected their meals Saturday in solidarity with the hunger strikers.

Prisoners threatened to expand their support and solidarity by launching open hunger strikes if the Israeli government fails to respond to the hunger strikers’ demands.

The prisoners’ affairs committee held the Israeli government responsible for rising tensions in jails, due to the regular application of arbitrary laws that violate international law.

The committee also called for activating an international campaign pressuring Israel to end its flagrant use of administrative detention, a practice under which a detainee can be held indefinitely without trial or charge under renewable six month periods.

Three hundred and fifty out of the over 5,500 Palestinians currently held in Israeli jails are held under administrative detention.

Hunger striking — one of the only means at their disposal — has been used by detainees in the past to protest arbitrary detention. Most recently, 31-year-old Mohammad Allan was released after a 66-day hunger strike that brought him close to death.

Israeli authorities rearrested Allan earlier this week, after his health had slightly improved, spurring condemnation from rights groups who say Israel is violating international law through his rearrest and detention of others like him.

The Knesset, Israel’s parliament, approved a law in July allowing the Israeli Prison Service to force feed hunger strikers if their condition becomes life-threatening, raising fears the practice may be used in the near future.